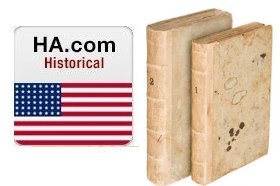 Led by The Otto Penzler Collection of Mystery Fiction and a copy of The Federalist Papers in its original boards, Heritage Auctions’ Rare Books Auction realized $1,684,038 against $993,900 in pre-auction estimates, the department’s third consecutive sale to realize more than 160 percent the estimated total.

Otto Penzler Collection of Mystery Fiction
Penzler won an Edgar Award as co-author of the Encyclopedia of Mystery and Detection, founded The Mysterious Press and owns The Mysterious Bookshop in New York. His collection of mystery fiction, the first 231 lots of which were offered in this sale, is considered one of the most extensive in the world. This sale featured mostly American authors, with a focus on hard-boiled writers. The total realized for the Otto Penzler Collection was $627,213.

Among the top lots from his collection in the sale:

A rare first edition in the original first printing dust jacket of Dashiell Hammett’s Red Harvest prompted aggressive bidding before it finished at $75,000. The rare copy is in such exceptional condition that Penzler himself called it the world’s best copy.

Hammett’s The Dain Curse, the author’s second book and the final Continental Op novel, drew $27,500. It originally was published in four parts in Black Mask from November 1928 to February 1929.

A first edition of Raymond Chandler’s The Big Sleep, signed by the author on the front free endpaper, nearly doubled its pre-auction estimate when it brought $57,500.

Popularly referred to as The Federalist Papers, the auction’s top lot, by Alexander Hamilton, James Madison and John Jay sparked a flurry of competitive bids before closing at $187,500, topping its pre-auction estimate by 150 percent. The two-volume set is considered by American historians to be the cornerstone of the new nation’s theory of government.

“These books are an important part of American history,” Heritage Auctions Rare Books Director James Gannon said. “Written as part of the effort to ratify the Constitution, it made the case for Federalism and sought to convince the citizens of the states. Only about 500 copies are believed to have been printed, and this one is still is in the publisher’s boards, which is exceedingly rare.”

Evoking memories of a favorite childhood book, Maurice Sendak’s “Moo-Reese” Tabletop Cow sold for $93,750. Drawn and painted in 2000 by Sendak, with help from Lynn Caponera, this 27-inch figurine was part of the “Cow Parade” in New York, Chicago and Zurich. In molded plaster decorated in pencil and water color with numerous characters from the popular children’s book Where the Wild Things Are, the figurine was sold in 2003 to support the Chicago Opera Theater.

Other top lots in the auction included, but were not limited to:

Sell Your Collectibles from the Comfort and Safety of Your Home