Auction houses were abuzz in 2019 with tens of thousands of cherished sports and non-sports collectibles being sold, the majority of which came with third-party certification from PSA. Once again, vintage cardboard led the way with many outstanding auction prices realized (APR), from a 1909-11 T206 Honus Wagner (graded PSA Good 2) that sold for $1.35 million via Mile High Card Company in October, to a 1933 Goudey Babe Ruth #144 (PSA Mint 9) that sold through Heritage Auctions for $528,000 at the start of last year. Overall, PSA is pleased to report that 10 of the top-selling collectibles auctioned last year were all certified by the industry’s leading third-party authentication and grading company.

With a combined value of $6,671,250, the lineup includes not only coveted cardboard, but a 1929 Babe Ruth game-used bat authenticated by PSA/DNA as a true Ruth gamer that’s been attributed to the Bambino’s 500th career home run! The 35-inch, 38-ounce ash bat was sold by SCP Auctions in December for an astounding $1,008,000. In addition, a rare Olympic gold medal from the 1936 Berlin Games, one that received a full Letter of Authenticity from PSA/DNA, also made the cut as it brought in $600,000 via Goldin Auctions in December. The medal is 24k gold-plated over silver and its history reveals that it belonged to none other than U.S. track-and-field star Jesse Owens, who earned four gold medals at the ‘36 Summer Olympics. This is just the second Owens’ gold medal to surface; the other two have so far been lost to history. 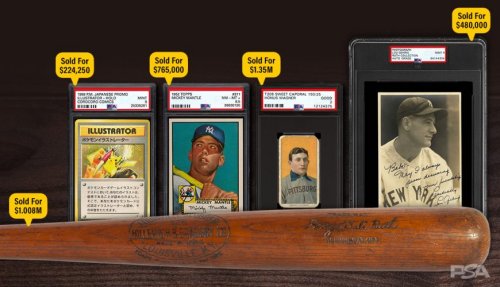 PSA is the world’s largest trading card, autograph and memorabilia authentication and grading service. Since 1991, PSA has examined and certified over 35 million collectibles with a combined value of over $1 billion. For additional information, visit www.PSAcard.com.