From an 1888 Goodwin Champions Cap Anson to an unused ticket for Derek Jeter’s 3000th hit game, virtually every era of sports is covered in the latest I Own It Now catalog from Memory Lane. The company opened its latest event on Thursday with more than 1,300 high end lots available for straight sale.

I Own It Now gives collectors the chance to make an immediate purchase or wait several days in hopes of snagging the item at a lower offer. 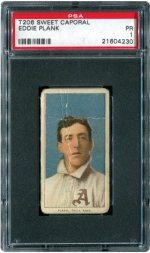 Leading off the catalog is a John F. Kennedy and Jacqueline Kennedy 1963 Presidential Christmas card, signed by both just days before their fateful trip to Dallas. Approximately 30 of the cards were signed. Memory Lane officials say the cards were never mailed after the president was assassinated November 22. The card is priced at $20,500.

There are hundreds of single common and minor star cards in high grades for a wide variety of vintage sports and non-sports sets.
Complete sets offered include one of the best 1954 Red Heart Baseball issues ever put together. With Mickey Mantle and the bulk of the 33 cards grading PSA 9, it carries a selling price of $45,000. The second best 1951 Red Menace set on PSA’s Registry is being offered by MLI. With a GPA of 8.271, it’s priced at $40,000.

There are several items related to Babe Ruth including two personal checks, one made out to ‘Cash’ signed on the front and endorsed again on the back.

The legion of Roberto Clemente collectors will find a check written by the Hall of Famer in June of 1972 ($4,200).

I Own It Now runs through Thursday July 3 at 4 p.m. Pacific Time. Collectors can make offers starting on June 23 (Monday) at noon Pacific Time. Several lots were already spoken for at listed prices in the hours after the sale opened Thursday.  There is a 15% buyer’s premium added to all lots.

To register and/or see the entire catalog, visit MemoryLaneInc.com.