More than 1900-lots of sports, entertainment and historical memorabilia sold for over $6.2 million as the Goldin Auctions 2019 October Legends Auction established a new company record for the most bidders and most individual winners on the company’s history. The auction also established records for the highest price ever paid for a modern basketball jersey, the most ever paid for an NBA 50 Greatest Players lithograph, the most expensive Larry Bird jersey ever sold, and the highest priced woman’s soccer item. 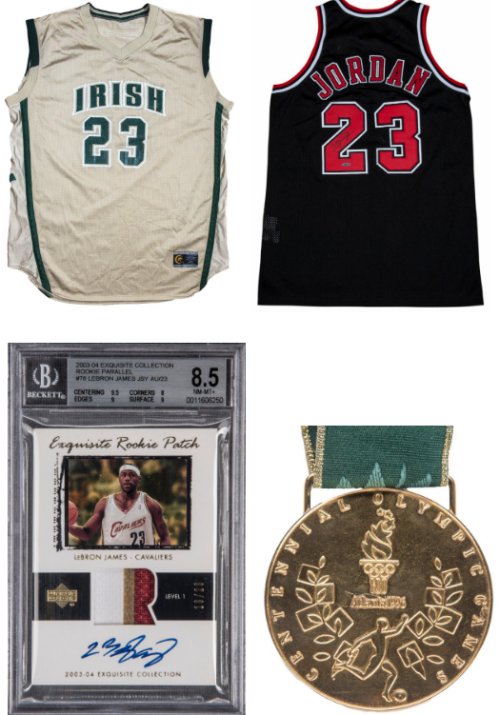 “Our annual October Legends Auction is always one of our most loaded catalogs every year and we knew this year was something very special,” said Ken Goldin, Founder of Goldin Auctions. “We want to thank all of our consignors for entrusting us with their memorabilia and congratulate our buyers and adding these historic items to their collections.”

The complete auction catalog is available at GoldinAuctions.com. Additional highlights are below (* indicates a record sale price):

*Lot #91 – 2002 LeBron James Games Used & Photo Matched (to First Sports Illustrated Cover and Game) St. Vincent-St. Mary’s Fighting Irish High School Gold Basketball Jersey (MeiGray & Resolution Photomatching) – The historic high school basketball jersey he donned on the cover of the February 18, 2002, issue of Sports Illustrated. The St. Vincent-St. Mary Gold Fighting Irish jersey was worn by James for much of his junior season. Comes with LOAs from The MeiGray Group and Resolution Photomatching for the game use and photo match. A detailed letter from our consignor who attended St. Vincent-St. Mary’s accompanies the jersey.(FINAL PRICE: $192,000)

Lot #119 – 1934 Lou Gehrig Signed NY Yankees Contract from his Triple Crown Season (PSA/DNA MINT 9) – The standard Uniform Player’s Contract calls for a $23,000 salary for 1934, the same amount he made the previous year. Signed on the inside second page with his full name “Henry Louis Gehrig” as well as by Yankees owner Jacob Ruppert and team GM Ed Barrow. (FINAL PRICE: $160,000)