The enduring image of Babe Ruth, unquestionably the greatest star ever produced by Major League Baseball and one of the most famous Americans ever born, is of the Titan of sport with the round belly and big, smiling face trotting around the bases after a Titanic home run.

Yet a baseball card coming up for auction in Dallas on May 14 shows a side of “The Babe” that few, minus the most rabid and hardcore baseball card collectors, have ever seen. 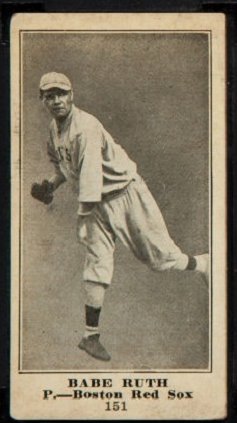 The 1916 D329 Weil Baking Babe Ruth Rookie #151 SGC 60 EX 5 as it’s formally called – just one of four known to the major card grading services with the Weil Baking advertisement on the back – depicts The Babe in 1916, just two years into his pro career, as a fit and lean pitcher just coming into his own. In fact, the year of this card would be his best year on the mound, where he posted an impressive 23-12 record with an impressive 9 shutouts.

“Babe Ruth’s humble beginnings as an orphan from Baltimore, MD and his rise to wealth and fame is the essence of the American dream,” said Chris Ivy, Director of Sports Auctions at Heritage Auctions. “Here you see the very beginning of his journey to legend status, before his ‘Ruthian’ appetites manifested and he became one of the most famous people on earth – as status he still carries today, decades after his death.”

While Ruth appeared in about every trading card promotion during his career, the one Ruth card that commonly eludes collectors and is, consequently, the most sought-after of them all, is this very rookie card.

“In the absolute sense, this is among the rarest of the rare in baseball memorabilia,” said Ivy. “Babe Ruth is the Gold Standard among collectors. I fully expect this card will occupy a prime spot in a very exclusive card cabinet somewhere.”