Over 1,200 lots will be available for bidding with the usual assortment of high-grade sports cards and memorabilia that puts Mile High Card Company at the forefront of the hobby. “It’s a very good auction,” said MHCC CEO and President Brian Drent, “There’s a wide variety of material to view here and we feel strongly that everyone will find something worth pursuing.” The auction opens on Monday, June 24th and concludes on Thursday, July 11th. 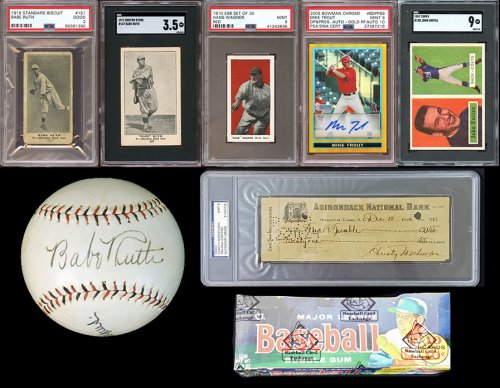 There are also press and league passes ranging from the 1870s through to 1995 as well as tickets to the inauguration ceremonies of President Grant, Cleveland, B. Harrison, McKinley, Taft, Wilson, FDR, JFK, LBJ and Nixon.

As magnificent as this upcoming event is going to be, the MHCC staff is already working diligently on the next auction and is in the process of assembling the strongest auction in MHCC history. Headlining the fall auction with be three of the most iconic baseball cards ever produced; T206 Honus Wagner PSA 2, T206 Ty Cobb with rare Ty Cobb Back PSA 4.5 and T206 Eddie Plank SGC 3.

We will be taking consignments at the 2019 National Sports Collectors Convention in Chicago, July 31st – August 4th at Booth 612/614, and if having your items featured next to that trio of classic cards isn’t enough of an incentive, consider that one lucky consignor at the National is going to win an autographed Babe Ruth single-signed baseball. For each $500 of value consigned, you get one ticket for the drawing. The bigger the consignment, the better the chances, but everyone gets a shot at it! If you desire the maximum possible return for your prized sports cards and/or memorabilia, please visit us at the National, call our office at (303) 840-2784 to speak with one of MHCC’s experts, or visit our website at www.milehighcardco.com.