One of the most iconic sports cards ever produced, the legendary 1916 M101-4 Sporting News Babe Ruth rookie card, will be headlining the Mile High Card Company October 25 – November 11, 2021 auction. Though not quite as rare as the T206 Honus Wagner card, it’s been far more elusive as several Wagner’s have seen the auction block in recent years, but a PSA 7 graded Sporting News Ruth RC hasn’t seen a public sale in well over three years. When asked if he thought the card would break into the top 10 of all sports card sales, MHCC CEO and President Brian Drent said, “Shouldn’t it?. We’ve seen a T206 Wagner top six million and cards of Luka Doncic, Pat Mahomes, and LeBron James go over four million. This is a 105 year old rookie card, one of the finest in existence, and it’s Babe Ruth.” 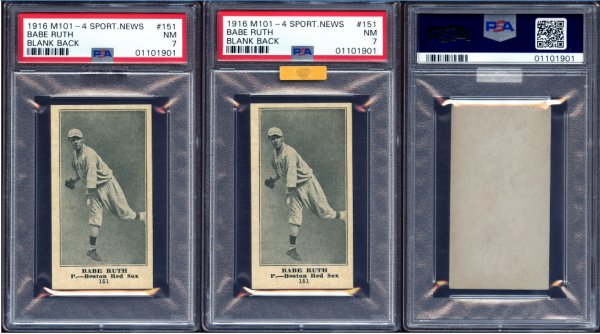 Unlike the above mentioned issues, the Babe Ruth rookie wasn’t part of a nationwide trading card campaign but rather the creation of independent printer Felix Mendelsson, who produced the blank-backed cards with the vision of selling them to sponsors who put advertising on the reverse and distribute them as baseball-themed business cards. Utilizing actual black and white photos instead of the colored lithographs featured on tobacco and candy cards of the era, the Mendelssohn series gave us a look at the Babe in real time; not yet a hulking home run masher for the Yankees but rather a skinny 21-year old pitcher coming off of his first full season with the Boston Red Sox. It would be a breakout year for Babe, posting a 23-12 record while leading the American League with nine shutouts and a 1.75 ERA over 323 ⅔ innings, adding a post-season win and a 0.64 ERA to help Boston to a World Series championship.

The Sporting Life Ruth RC was produced in much smaller quantities than other important cards like the 1933 Goudey #91 Babe Ruth and 1952 Topps #311 Mickey Mantle, both of which appear on the top 10 sales list at $4.2M and $5.2M respectively. “The evaluation of PSA 7 for a card of this magnitude is truly impressive but still seems conservatively graded” said Drent. One of the common problems of the M101-4 series, and the Ruth card in particular, is the presence of roller lines that impede upon the central image, but this example shows no evidence of that and projects eye appeal comparable to the few existing PSA 8 examples, which haven’t been seen in over a decade and would assuredly vault to the top of the list as the first to crack the $10 million dollar mark.

This museum quality piece is just the start of an incredible event that will close out the 2021 year. MHCC is presently working hard to make next year even bigger and better, and there’s still time to get your consignments in for the first auction of 2022. If you desire the maximum possible return for your prized sports cards and/or memorabilia, please call our office at (303) 840-2784 to speak with one of MHCC’s team of experts or visit www.milehighcardco.com.