One hundred years after Babe Ruth made his MLB debut, Goldin Auctions and the Babe Ruth Birthplace & Sports Museum made history by hosting the largest auction of Babe Ruth memorabilia in the Goldin Auctions Babe Ruth 100thAnniversary Auction on July 12, at the Sports Legends Museum in Baltimore. Among the 100+ lots of memorabilia, that grossed a combined $3.6 million, was Ruth’s 1918 players contract which sold for a remarkable $1.02 million – a record sale price for a contract and even more than the famed Babe Ruth Sale to the Yankees document.

Collectors can continue to celebrate as the Goldin Auctions Babe Ruth 100th Anniversary Auction continues online through July 18 at www.GoldinAuctions.com. More than 1,200 lots of memorabilia, including more than 150 Ruth items, are still available for sale.

“It was a magical night and especially appropriate that records were set when we honored the man who set more records than any player in baseball history,” said Ken Goldin, Founder of Goldin Auctions. “We thank the 100 bidders who attended the live auction and the thousands others who bid online. We are excited to keep the action going online for another week for collectors all across the world.” 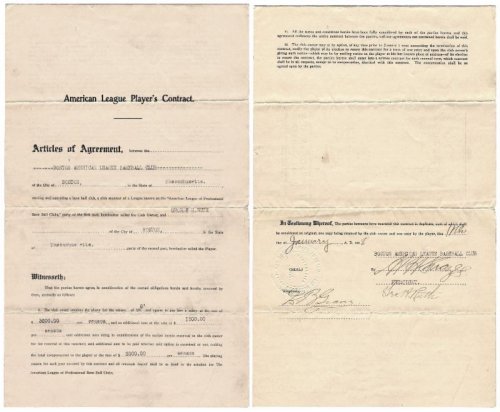 Here’s a look at some of the highlights from Saturday’s live auction.

About Goldin Auctions: Sports memorabilia impresario Ken Goldin has sold more than $600 million in memorabilia from many of the biggest names in sports, history and pop culture and was the pioneer of using the medium of television to sell sports memorabilia. Earlier this year, Goldin Auctions sold a Honus Wagner T206 card for a public sale record $2.1 million. Goldin Auctions strives to break new ground and offer collectors the best in collectible treasures up for auction in the marketplace. All game worn or autographed items come with team, player, league or additional LOA from industry leading authenticators; and collectors can bid with confidence that their proxy/ceiling bids remain confidential. For more information, visit www.goldinauctions.com.