The Detroit Tigers uniform worn by Hall of Fame outfielder Ty Cobb during the 1922 season sold for $358,500 on Nov. 11 in Heritage Auctions’ Vintage Sports Collectibles Signature® Auction, notching the fourth six-figure price commanded by the category for a game worn jersey in 2011. A rare “Shoeless Joe” Jackson signed baseball topped all autograph results at a price of $77,675, bringing the auction total to just more than $5.3 million. All prices include 19.5% Buyer’s Premium.

“This event was a testament to the depth of the Heritage bidding clientele,” said Chris Ivy, Director of Sports at Heritage Auctions. “It’s no small feat to achieve consistently strong prices for $10 million worth of collectibles in a three month period, but the top collectors continue to turn out in force.” 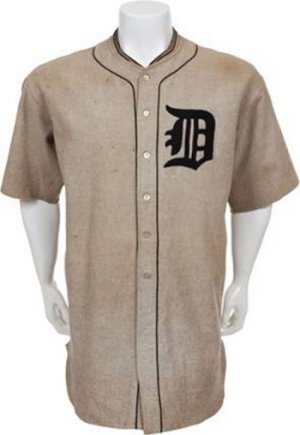 The $358,000 bid for Cobb uniform earned ownership of one of just two Detroit Tigers uniforms worn by Ty Cobb known to survive to present.

“This is the type of piece that top collectors dream about, and the type made me want to get into this business in the first place,” said Ivy. “It’s humbling to think we’ve been handled a Cobb, a Cy Young, a Lou Gehrig and a Hank Aaron rookie jersey in a single year.”

The legend and the value of “Shoeless Joe” Jackson continued to climb in this auction with the $77,675 price realized for the finest known autographed ball from the banished Black Sox star. The ball was consigned by the son of a minor league manager, who once met Jackson, requested an autograph and watched as he slowly signed his name on the ball.

“We’ll likely remember 2011 as the year of the signed baseball,” said Ivy. “This is the eighth ball to top $50,000 in this year’s Signature auctions.”

Heritage further cemented its position as the leading auctioneer of rare vintage golf collectibles with stunning results for some of the links’ most important artifacts. Walter Hagen’s 1925 PGA gold medal led all competitors with a result of $62,738. His storied rival Bobby Jones provided four early winner’s medals for the event, each surpassing a price realized of $20,000, including a $33,460 price realized for Jones’ 1920 Western Golf Association Amateur Medal.

Fresh-to-the-hobby sets drew the most action in the trading card portion of the auction as Heritage further developed its reputation as the industry’s top source for significant “finds.” Among the more noteworthy offerings making debuts within the event were full offerings of the 1933 Goudey and 1915 Cracker Jack issues. The maddeningly scarce 1933 Goudey Napoleon Lajoie drew $41,825 for an SGC 84 NM 7 example, and the second-finest 1951 Parkhurst Gordie Howe (PSA NM-MT 8) crossed the five-figure threshold with a $10,755 winning bid.

Other notable results from the auction include:

Heritage Auctions, headed by Steve Ivy, Jim Halperin and Greg Rohan, is the world’s third largest auction house, with annual sales more than $750 million, and 600,000+ online bidder members. For more information about Heritage Auctions, and to join and gain access to a complete record of prices realized, along with full-color, enlargeable photos of each lot, please visit HA.com.