A high grade 1932 U.S. Caramel set was broken up and sold card by card to highly interested buyers from coast-to-coast as Memory Lane Inc. put the cap on its Spring Fever Rarities Auction.  The prize card in the set, a PSA 8 (NM/MT) Babe Ruth sold for a record-setting $42,767, one of several new marks set as bidding wound to a close early Sunday.  In all, over 900 lots were sold in the auction, with over $1.24 million realized.

The 1932 U.S. Caramel set, with each card grading a uniform ‘8’, was sold card-by-card after total bids for the 31-card set totaled slightly higher than the bidding for the complete set as a whole.  The cards sold for approximately $213,000 combined.  Memory Lane also parted out 1952 and 1957 Topps collections. 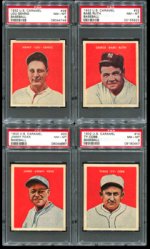 “We had a lot of fun breaking some iconic sets,” said Memory Lane’s J.P. Cohen.  “This auction again showed the strength of high grade vintage cards, whether they were Hall of Famers or cards from rare sets that collectors have on their want lists.”

The selling price of the Ruth card, which included a 19% buyer’s premium, is nearly double what a PSA 8 example sold for less than seven years ago.  The Lou Gehrig card was sold for $28,061 while the Rogers Hornsby brought $16,975.

Inside each of its catalogs, Memory Lane included replica cards from the set, each offering a $100-500 discount off of the purchase of one of the lots.

Among the most popular items in the auction were several lots of vintage unopened material including several 1970s boxes and a 1952 Topps wax pack, Those collecting high grade sets never shy away from the opportunity to land a PSA 10.  That’s why the card of a Washington Redskins punter from 1971 soared to $1,550.  The Mike Bragg card will surely help a collector’s quest to build the finest set of ’71 Topps football cards.

With the busy summer months approaching, Memory Lane is making plans for its next catalog auction and you can expect to see some of those items at the upcoming National Sports Collectors Convention in Chicago.  Those who consign items to the auction will receive a free five-day pass to the show.  Contact Memory Lane at (877) 606-5263 or visit their website.