The lone copy of the 1933 Goudey Babe Ruth #53 graded PSA Mint 9 sold for $4,212,000 early Sunday morning as part of an eight-figure collection of sports cards and memorabilia sold through Memory Lane Inc.  The Ruth card was the kingpin of more than 900 lots in the auction of items consigned by the family of the late Dr. Thomas Newman, a Florida neurologist who fell victim to COVID-19 in January.  Newman’s collection included some of the highest graded examples of the hobby’s most popular issues.

In all, five cards sold for more than $1 million each including the 20% buyer’s premium tacked on to all winning bids.  The entire collection sold for $21.5 million.  According to Memory Lane, over 50 lots established new price records.

Seventy-six bids were made for the Ruth card—the last coming at 5:40 AM Eastern time Sunday as bidders slugged it out in online bidding for one of the best collections ever to reach the auction market. Newman purchased it for less than $20,000 in the mid-1990s.

Newman purchased it in 1986 after it was discovered that year in Massachusetts as part of a large find of 1952 Topps cards sold to Alan “Mr. Mint” Rosen. 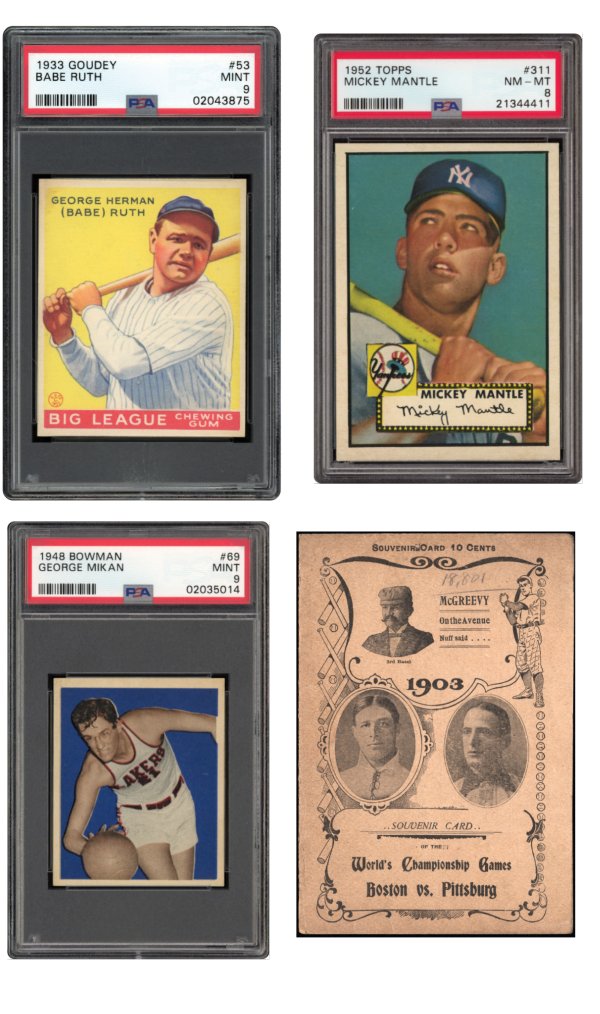 1925 Exhibit Lou Gehrig rookie cards have exploded in price in recent years and the Memory Lane sale of one of the higher graded examples—a PSA 5—established a new record.  One of four rated EX by PSA with one higher on the population report, the Gehrig ended at $1,032,000.

Newman’s expansive accumulation of World Series programs was also offered in the catalog, including one from the first contest in 1903 between Boston and Pittsburgh.  One of the best known copies of the edition sold at the Huntington Avenue Baseball Grounds in Boston, it sold for $112,103.  The program was from Game 3 of the best of nine series and the attendance (18,801) is written in pencil on the front cover.

Complete results of the auction can be found here.