On Sept. 30 1934, Babe Ruth played his final game as a New York Yankee. The Bambino went hitless in his last game in pinstripes as the Yankees fell to the Washington Senators 5-3 before 15,000 fans at Griffith Stadium. The team’s 1934 season was remarkable for many reasons, especially because it was the last time the sport’s two biggest icons– Ruth and Lou Gehrig – shared the field. The two also experienced drastically different fortunes that year.

The team finished 94–60, seven games behind the Detroit Tigers. Amid this disappointment, the Yankees did the unthinkable and released The Babe, even though the legendary hitter was selected to the All-Star team for the second consecutive year. For Gehrig, 1934 brought arguably his greatest performance. Until Cal Ripken Jr. broke his record, The Iron Horse played more consecutive games in history. But he never had a better season than this one, when he earned baseball’s celebrated Triple Crown. Hindman is proud to offer a 1934 Yankees team signed baseball from that historic season with a Beckett Letter of Authenticity.  View the item or bid at https://www.liveauctioneers.com/item/90602004_a-babe-ruth-lou-gehrig-and-1934-new-york-yankees-team. 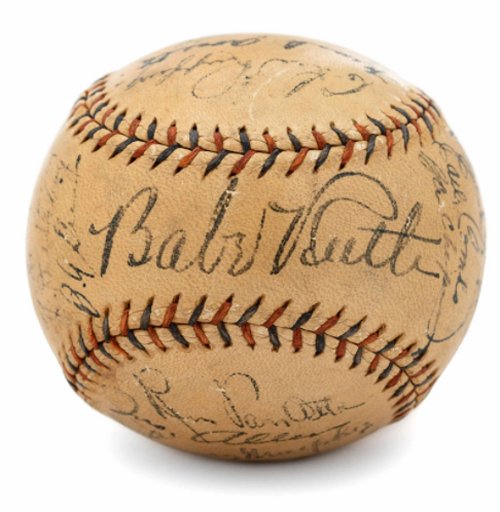 Highlights In the Current October 20, 2020 Auction Include: