The history of the modern Olympic Games is filled with historic accomplishments – Jim Thorpe’s pentathlon and decathlon, Mark Spitz’s seven gold medals, the 1980 “Miracle on Ice” – but none had to social, historical or political impact as Jesse Owens’ performance at the 1936 Olympics in Berlin. One of the four gold medals he earned is up for bids in the Goldin Auctions 2019 Holiday Auction from Nov. 18 through Dec.7, 2019 at GoldinAuctions.com.

“No athletic award carries the same historical weight and value as Jesse Owens’ gold medal-winning performance at the 1936 Olympics, for no athlete ever achieved nor proved as much as Owens did during those Games,” said Ken Goldin, Founder of Goldin Auctions. “Even though we have offered at auction some of the most iconic sports collectibles, it is the highest honor to share this museum-worthy item with the world.” 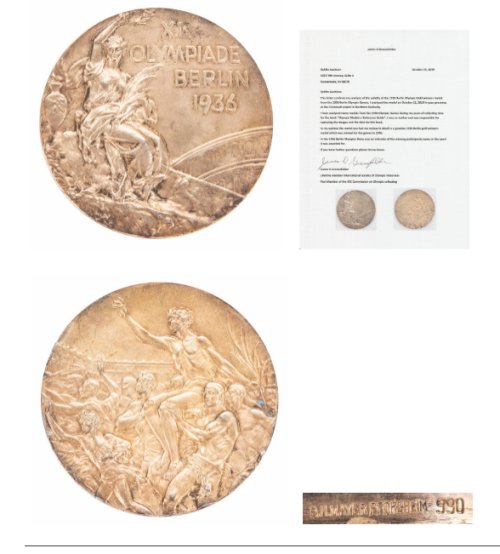 Of the four, identical gold medals Owens won at the 1936 Berlin Olympics, the whereabouts of two have been lost to time. The third, which was gifted by Owens to friend Bill “Bojangles” Robinson, was sold at auction in 2013 to supermarket magnate and billionaire investor Ronald Burkle for $1.46 million. The medals awarded at the 1936 Games were not engraved with the name of the awardee nor the event, so it is impossible to verify if this medal is from Owens’ win in the 100 meters, 200 meters, long jump, or 4×100-meter relay. The medal is a 55 mm piece of world history. Designed by Giuseppe Cassioli, the obverse has the Goddess of Victory with a palm in her left hand and a winner’s crown in her right. “XI. OLYMPIADE BERLIN 1936” in raised letters appear to her right. The reverse features a victorious athlete being carried away from the Olympic stadium by a cheering crowd. The medal shows the expected toning and wear from age and displays magnificently. It comes with a Letter of Authenticity (LOA) from PSA certifying it as an official gold medal from the 1936 Olympics.

At the 1936 Games, Owens became the first athlete in Olympic history to win four gold medals. On top of his stunning display of athletic ability, Owens’ record-breaking exploits was a crushing defeat of Hitler’s Aryan racial ideology. Owens returned to America a hero, but his fame was short-lived. Racial laws and cultural norms kept Owens from capitalizing on his Olympic triumphs. Because of the color of his skin, there were no corporate endorsements, high paying speaking engagements or coaching offers.

Fortunately, Owens’ friends often came through with job opportunities that kept the former Olympian financially stable. One of those friends was John Terpak, Sr., a weightlifter who met Owens during the 1936 Games. As early as 1954, Terpak arranged for Owens to appear at speaking events in his native Pennsylvania, and he was invited back many times over the next decade. Owens showed his appreciation for his friend’s continued invites by eventually gifting Terpak one of the four gold medals he won at the 1936 Olympics. While the gifting of a personal memento such as an Olympic gold medal might seem extravagant, it is a documented fact that the Olympic hero had previously presented one of his gold medals to close friend and entertainer Bill “Bojangles” Robinson.

The medal was a treasured possession of Terpak until he passed away in 1993, whereupon the medal passed to his children Joan and John, Jr. until consigned to Goldin Auctions. The Terpak sibling’s affidavit outlines the history of the medal from its gifting by Owens to their father up until the present. The affidavit also mentions the existence of a 1936 gold medal that resides in the York Barbell Museum and states that the museum medal originates from a member of the 1936 US Weightlifting team and is separate from the one gifted to Terpak, Sr. by Jesse Owens. An additional affidavit signed by Robert M. Strickler, the Terpak family lawyer since 1960, states that he was aware of the medal’s existence and provenance dating back to the 1960s. It is known that before he passed away in 1980, Owens received replicas of his gold medals. Renowned Olympic medals expert James D. Greensfelder has analyzed this medal and deemed it an authentic example minted for the 1936 Games. His letter of authenticity also accompanies the medal.