It is the most prestigious individual award in the entirety of American sports, and perhaps the most recognizable sculpture in the entirety of American artwork. More exclusive than any Hall of Fame plaque, which averages far more than a single new presentation per annum, the Heisman Trophy confers upon its recipient a breed of athletic immortality unlike any other bronze commemoration, and elevates those collectors with the motive and means to claim the rare few made available at auction to their own most exclusive fraternity.

The tradition of honoring the most outstanding player in collegiate football recently entered its ninth decade, but the offered example is just the third ever issued, and just the second to honor iconic coach John Heisman, as the inaugural edition, earned by Chicago halfback Jay Berwanger, was named instead for the issuing body, The Downtown Athletic Club Trophy. Year Two would see Yale University’s Larry Kelley claim the honor, the first to bear the Heisman name. That trophy famously sold nearly two decades ago for $328,110, just months before Kelley’s passing at age eighty-four.

The offered example found the Yale Bulldogs defending the honor, the first of only three times in the history of the award that saw student athletes of the same institution claiming the prize in back-to-back seasons. Like Kelley, Clint Frank was invited to join Yale’s prestigious undergraduate social group, named Skull and Bones, whose membership subsequently produced several United States presidents, and industrial leaders.​ ​Frank would beat out Byron “Whizzer” White of the University of Colorado in 1937 Heisman voting, a man who would be nominated by President John F. Kennedy and elected to the Supreme Court. Only once more, with Princeton’s Dick Kazmaier claiming the prize in 1951, would an Ivy Leaguer earn bestowal of college football’s greatest honor. 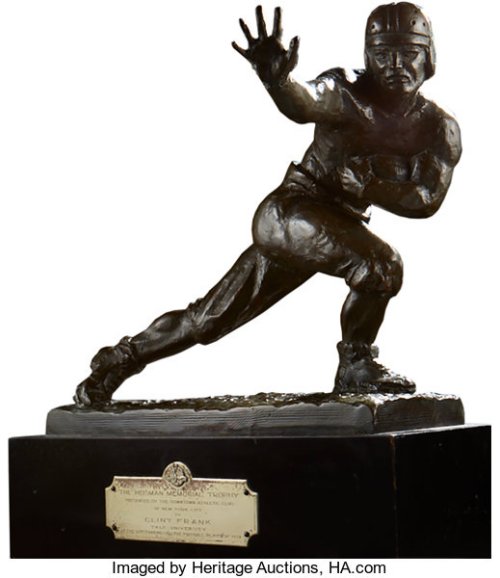 A two-way player, in the spirit of the times, Frank did everything in new coach Ducky Pond’s single-wing system-run, throw, catch, kick returns and play calling. At safety, he seemed to be involved in every tackle despite near-sightedness so severe that teammate Jimmy DeAngelis once remarked, “From back there at safety, I’m not sure he could see the line of scrimmage.” Injuries likewise plagued Frank, but he nobly fought through the pain, drawing admiration even from his greatest rivals. As a junior, he was visited in the locker room after the Harvard game by the Crimson coach Dick Harlow, who told him, “You are the greatest back I’ve ever seen.”

The sculpture that rests atop the sturdy base of this treasure of the collegiate gridiron is the creation of Frank Eliscu, who enlisted New York University running back Ed Smith as a model, striking the stiff-armed pose as famous today as the Mona Lisa’s smile. The artfully engraved plaque centered below reports the historic details:

“The Heisman Memorial Trophy, Presented by the Downtown Athletic Club of New York City to Clint Frank, Yale University, as the Outstanding College Football Player of 1937.”

The trophy plaque exhibits a small degree of oxidation commensurate with its advanced age, but otherwise the sturdy award is free of any condition distractions. It is consigned to auction by Frank’s children, and will be accompanied by a signed letter of provenance from the family.

Like his old teammate Larry Kelley before him, Frank passed on offers to join the nascent National Football League, becoming instead a highly successful businessman, retiring at age sixty to turn his attentions to philanthropy, a champion of the arts, medical research and special needs children. At the time of his passing at age seventy-six in 1992, Frank’s legacy as a humanitarian was equal to that of his football exploits.

Clint Frank met the requirements, defined in the Mission Statement of the Heisman Trust, in his winning the Heisman Trophy in 1937. He would continue to follow this Heisman Mission throughout his life, epitomizing great ability with diligence, perseverance, integrity, and hard work. Letter of provenance from Frank family.

Bid on this item at https://sports.ha.com/itm/football/1937-heisman-memorial-trophy-presented-to-yale-university-halfback-clint-frank/a/50006-50773.s?ic4=ListView-ShortDescription-071515

Bidding for this item concludes at Heritage Auctions on October 18, 2018.