Consign your items now and be a part of the MEARS Auction experience. Advanced jersey collectors and football fans know how rare WW II era game worn jerseys are to find. HOFers from the era are non-existent. For the MEARS March 24th-31st, 2012, our featured lot is a 1946-49 Tony Canadeo Green Bay Packers game worn jersey. Originating from a drug store owner in Green Bay, WI, the jersey has been in private hands since 1949. The jersey is in phenomenal condition and grades a perfect MEARS A10.  Other recent additions to the March 2012 MEARS auction include: Autographs
1930 Bob Shawkey New York Yankees Payroll Check
1925 Urban Shocker New York Yankees Payroll Check
1938 Babe Ruth Single Signed Personal check 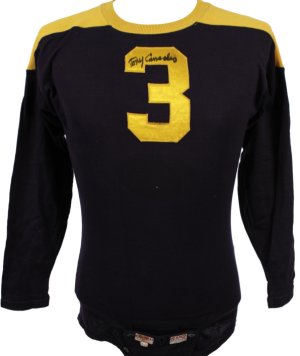 Consignment checks for the February auction are being processed, with several larger checks already mailed to our loyal customers. As our history indicates, checks will be sent in 30 days or less.

Consignments already in house for our March auction:

This is just a small example of items in house and many more packages are enroute to the MEARS Auction Center. If you have a consignment, please contact our professional staff to discuss the best way for MEARS Auctions to help you maximize the value of your collection. Please contract Troy Kinunen at (414)-828-9990 or email troy@mearsonline.com.