Memory Lane’s upcoming catalog is a doubleheader. The Southern California based company has been busy gathering up mounds of rare and high-end items for one of its most extensive auctions ever, packing over 2,200 lots into two separate catalogs that will be arriving on collectors’ doorsteps in a matter of days. The Summer Rarities Auction is slated to open August 17 and will run through September 10, 2022 with details and preview copies of the catalog available on Memory Lane’s website. (Preview the auction on-line here Now!)

One catalog is dedicated exclusively to autographs and the first item is a doozy:  a 1947 Babe Ruth signed ball with a PSA 10 GEM MINT signature and provenance that ties it to a specific time and place:  “Babe Ruth Day” in Houston, TX on July 10, 1947. 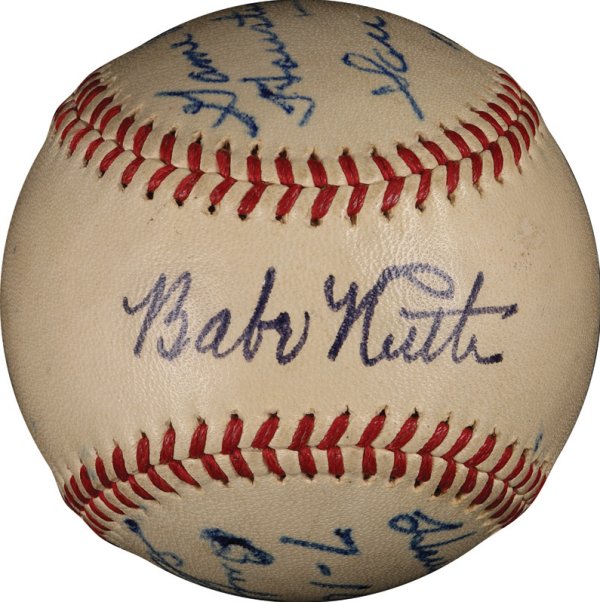 The blue fountain pen signature on an official Texas League ball is accompanied by an inscription done by the ball’s original owner listing the location, time, place and result of a game that was played that day with Ruth in attendance. The stop in Houston was one of several made by the ailing legend on behalf of American Legion Baseball and sponsored by Ford Motor Company.

It’s one of numerous autographed Ruth pieces in the auction. Also offered is a 1922 Ruth signed New York Yankees payroll check dating to the first game of the 1922 World Series, a 1927 signed check from the account of his longtime agent Christy Walsh, the only known autographed 1932 U.S. Caramel baseball card with the signature graded Mint 9 by PSA and a 1939 Baseball Hall of Fame first day cover.

The auction also has a Lou Gehrig bonus payroll check dating to the 1930 season.

Other highlights from the Autograph Rarities catalog include a total of 356 PSA Encapsulated autographed 1952 Topps baseball cards including those from Mickey Mantle, Jackie Robinson and Willie Mays and a remarkable group of autographed Roberto Clemente cards from 1956-1972 including a few that represent the only signed copies known to exist.  None of the signed Clemente cards has a PSA authenticated population of over ten with nearly all in the low to mid-single digits.

The second of the two catalogs includes a wide ranging span of single cards, sets, near sets and memorabilia.

Bidders will have a chance to acquire a 1961-62 Fleer Basketball unopened wax box that includes documentation from BBCE revealing that the box includes an unopened pack with a Wilt Chamberlain rookie card on top, another with a Chamberlain in Action card and a third showing an Elgin Baylor rookie card. 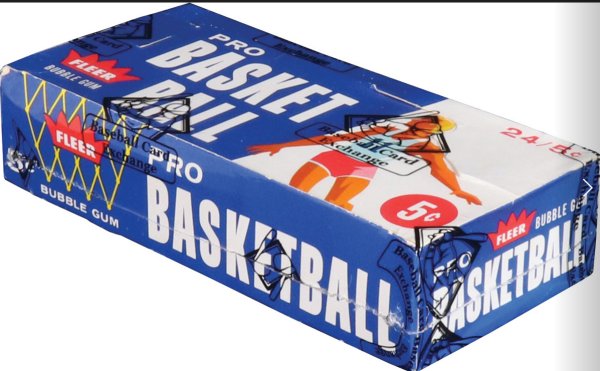 Numerous pre-War cards are featured including one of the T206 set’s “Big Four,” a PSA 3 copy of the Sherry “Magie” error card.  Other low population and high-grade T206s are being offered as well as a fresh to the hobby T204 Ramly Walter Johnson (PSA 2).

Collectors looking for Ruth will find plenty of them in the catalog along with Memory Lane’s usual vast selection cards from virtually every era, highlighted by a PSA 9 Pete Rose rookie (only one higher) and dozens of Mickey Mantle cards. 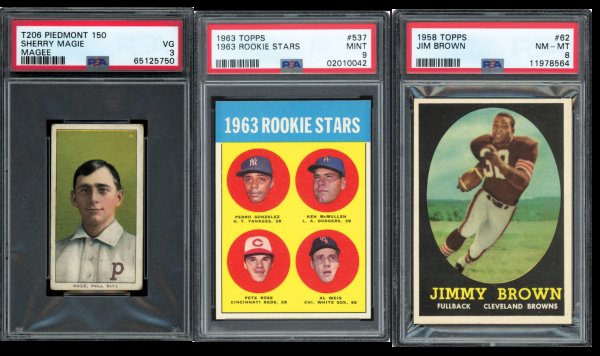 The catalog features the number two ranked 1952 Bowman football set—the best of a staggering group of 25 of the popular vintage issue pieced together over a 25-year period by avid collector Chris Stalikas, who had a fondness for that particular set and built them all before his unfortunate passing earlier this year.

Another eye-popping collection is a huge group of Boston Red Sox programs including one of two known copies from the first game of the modern World Series in 1903 and other Series programs from Fenway Park’s earliest days:  1912, 1915, 1916 and 1918.

The Summer Rarities Auction is slated to open August 17 and will run through September 10 with details and preview copies of the catalog available on Memory Lane’s website.