Bidding extended into the early morning hours of the Friday before the Labor Day holiday weekend, and when the dust settled, a 1951 Bowman Mickey Mantle rookie card graded PSA 9 (mint) had reached a new plateau. The card sold for $220,150 in Memory Lane Inc’s 2013 Summer Auction. The price includes a 19% buyer’s premium.

The Mantle card was part of the Graham Rookie Card Collection sold by the southern California-based auction company. Dozens of mint and gem mint cards of the biggest icons in baseball history were part of the 20-year accumulation by an advanced collector. Also among the cards from the collection was a 1916 M101-5 Babe Ruth (EX+) which sold for $98,175 and a 1939 Play ball #92 Ted Williams PSA 9, which realized $57,643.
Several record-setting prices were attained when the final bids were placed in the auction. Total sales were $1,461,790.

“We are very excited by the activity and the prices realized,” said Memory Lane’s J.P. Cohen. “The market is very strong for high end key cards. There were a number of new bidders who participated in the auction which is exciting to see.” 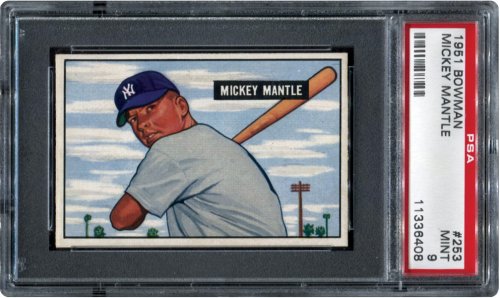 The other major rookie card in the ’51 Bowman set, Willie Mays, was also offered in the auction—this one in PSA 8 (near mint-mint) grade. It sold for $19,881.

Memory Lane is now accepting consignments for its our next I Own it Now catalog. The deadline will be end of September. The company’s winter auction will take place in December with consignments currently being accepted for that as well. Contact them by phone at 877.606.LANE (5263) or via the Memory Lane website.