Hot on the heels of its $11.9M Signature® auction in November – the largest sports collecting hobby event of 2015 – Heritage Auctions breaks down one of the finest bubble gum baseball card sets ever compiled – a 1952 Topps Master Set, #5 on the PSA Set Registry – to offer its 485 individual component cards in an online-only extended bidding format auction on Dec. 10, 2015.

“Our consignor’s unflagging pursuit of the highest-graded cards he could acquire for this enormously important issue,” said Chris Ivy, Director of Sports Auctions at Heritage, “is now going to enhance some of the top collections in the world.” 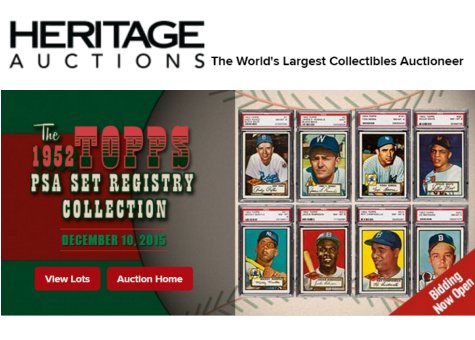 The three greatest stars of the issue – the rookie cards of Mickey Mantle, Willie Mays and Eddie Mathews – appear in NM-MT 8 condition, as does the key Andy Pafko, who earns his elite significance not through Hall of Fame talents but rather through his positioning as the number one card in the set.  Many other cards soar even higher, often appearing as one of a tiny handful at the grade, with none higher.

“Many of the low-population common cards in this set haven’t appeared in these high grades at auction for several years,” said Ivy.  “It’s a can’t-miss event for the upper echelon of post-war trading card collectors.”