Collectors paying record prices for rare high-grade vintage trading cards, have another opportunity to bid upon some of the industry’s most prized cards as Goldin Auctions 2017 Great American Trading Card Auction runs through April 1 at www.GoldinAuctions.com. 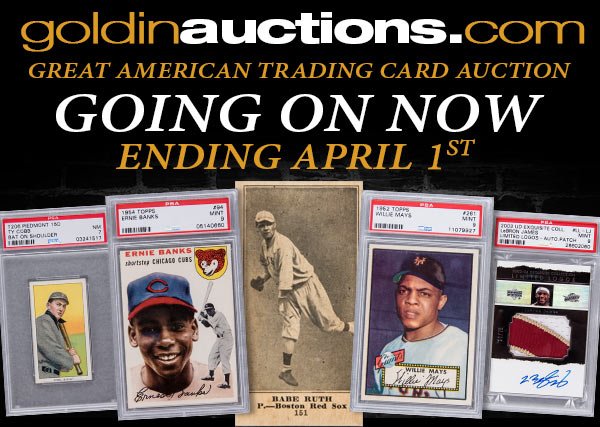 The second annual event offers 100 lots of rare high-grade trading cards. In the inaugural event, last fall, more than 20 new record prices were established including the T206 Jumbo Wagner selling for $3.12 and a modern-day basketball record sale price of $312,000 for a 2003-04 Upper Deck LeBron James 1/1 “Ultimate Logos” Autographed Logoman Rookie PSA MINT 9. Some of the highlights of this auction are; 12 high-grade Mantle’s, 5 Ruth’s, 5 Mays’, 4 Jordan’s, a pair of Gretzky’s and a dozen lots of football greats from Brown and Starr to Montana and Brady.

Here’s a look at some of the key cards up for bids through April 1 at www.GoldinAuctions.com.