Goldin Auctions is offering collectors two chances to bid upon a rare collection of sports memorabilia this summer as the 2015 Goldin Auctions Summer Auction includes both a Premium Live Auction on July 31, during the National Sports Collector’s Convention in Chicago, and an online auction beginning today through August 8th,  at www.GoldinAuctions.com

To see the 1,200+ lots of sports, entertainment, historical and pop culture memorabilia, or to register for the auction and receive a free catalog, visit www.GoldinAuctions.com.  Items #1-108 will be sold at the Live Premium Auction while all others will be sold online.

“The National Sports Collector’s Convention is the annual event where sports memorabilia takes center stage and the biggest and most passionate collectors gather to build their collections and celebrate the hobby,” said Ken Goldin, Founder of Goldin Auctions. “We are honored to be hosting this exciting event and we’re proud to have assembled a collection of memorabilia worthy of the occasion.” 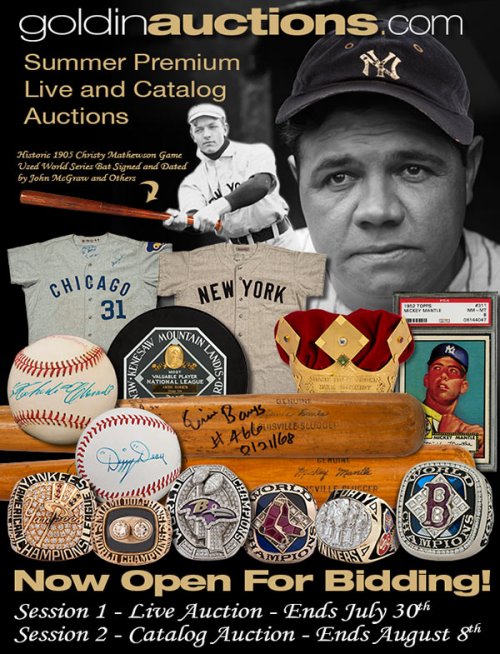 Although there are more than 1,200 lots up for bids representing sports, entertainment, historical and pop culture, the 2015 Goldin Auctions Summer Auction offers one of the most impressive collections of baseball memorabilia ever assembled. In addition to personal collections from Hall of Famers Mike Schmidt and Andre Dawson, the auction also features five Gold Gloves, a rare Babe Ruth game worn Yankees cap, Christy Mathewson’s game used and signed 1905 World Series bat, a 1952 Topps Mickey Mantle rookie card graded PSA8, and a dozen game used bats that are each expected to fetch more than $10,000.

The Premium Live Auction will be held on July 31, at the Muvico 18 Theater in Rosemont, IL, located just a mile from the Donald E. Stephens Convention Center, the site of the National Sports Collector’s Convention. It will include 100 live lots of premium high-value sports memorabilia, each valued at over $10,000.

Here’s a look at some of the marquee items:

Lot #40 – 1905 Christy Mathewson Game-Used an Signed World Series Bat –Mathewson passed this bat around during the 1905 World Series locker room celebration and had several of his teammates sign it, including Red Ames, George “Hooks” Wiltse, and Billy Gilbert. To cap it off and assure collectors of its authenticity, Hall of Fame manager John McGraw signed and dated the bat “Oct. 14 -05”. This is the first time the bat has been offered for sale.

Lot #32 – 1932 Babe Ruth Game Worn Yankees Cap – just one of four know Ruth caps it has a superlative lineage of provenance unparalleled by any Ruth cap previously offered for sale. It was originally presented from the personal collection of Yankees manager Joe McCarthy as a gift to a young newspaper delivery boy named Robert O’Brian in McCarthy’s adopted home town of Buffalo, NY.

The Andre Dawson Collection – 18 items – 13 online and 5 in the Live Auction including:

The Mike Schmidt Collection – 21 items 18 online and 3 in the Live Auction including:

Lot #74 – Harvey Haddix Near Perfect Game Glove – Haddix had the glove bronzed after his 12+ perfect innings versus Milwaukee in 1959 – among the greatest pitching performances in baseball history. 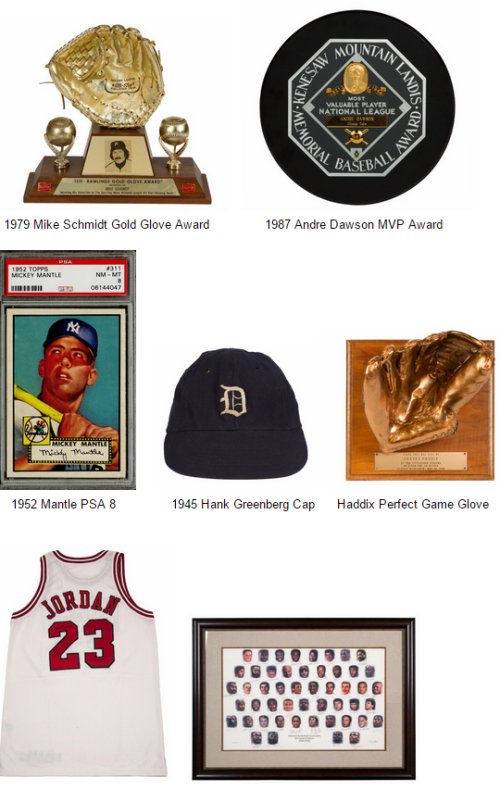