“This is a high grade example of a very famous baseball card of one of the most legendary players to ever put on an MLB uniform,” said Chris Ivy, Director of Sports Collectibles Auctions at Heritage. “Clemente has only grown more beloved and more mythical as the decades have passed since his untimely 1972 death in a plane crash while delivering relief supplies to Nicaraguan earthquake victims. The record price realized for this card is a testament to just how cherished Clemente still is.”

The card sold to an anonymous collector as the Heritage February Platinum Night Sports auction played out before a packed house at the Fletcher-Sinclair Mansion on Manhattan’s Upper East Side. The parade of some of the rarest and most sought-after sports memorabilia in the world soared to an auction total of more than $9.3 million. 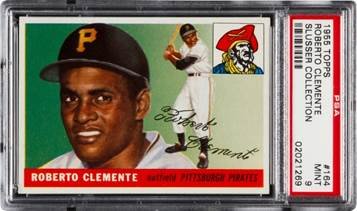 The highest price realized in the auction came for another icon of the hobby, and of American Pop Culture, in the form of an extraordinary and rare 1952 Mickey Mantle Topps rookie baseball card, graded in Near-Mint to Mint 8 condition, which sold for $501,900, only the second time one of these cards has topped the half-million dollar mark.

“The 1952 Topps Mantle rookie has become the most recognizable baseball card in the world,” said Ivy. “Its profile, and price, has been rising steadily in the last few years. The price realized for this example just reinforces its place as the current gold standard.”

The earliest days of the career of Mickey Mantle were also documented in the auction, including  the 1949 contract that the 17-year old slugger signed the day of his high school graduation to legalize scouting by the Yankees – the first contract Mantle ever signed – which realized $119,500, and the earliest known payroll check from Mantle’s service to the franchise, which brought $52,580.

The emotional high-point of the evening came with the sale of the $464,000+ Jerry Kramer Collection, before which Kramer himself addressed the crowd to a standing ovation, including the most significant NFL Championship ring ever offered at auction, Kramer’s 1967 Green Bay Packers Super Bowl I Championship Ring, which realized $125,475. The ring was among more than 50 items of Green Bay Packers memorabilia up for auction from Kramer’s personal collection.

“Jerry Kramer devoted his life to making the world a better place and I’m not surprised collectors did not hold back to own a piece of his personal and professional football legacy,” said Chris Nerat, Sports Consignment Director at Heritage.

The Andy Leonard Collection, which was the subject a much pre-auction media attention, consisting of nine of the earliest known professional baseball-related documents outside of the Hall of Fame, and the earliest such documents ever offered at public auction –  the earliest of which date to the 1871 season – realized a combined $76,480 when it sold at the auction.

The documents were been consigned by Leonard’s grandson, Charles McCarty, 83. McCarty said that he plans to use some of the proceeds from the auction to build a suitable monument to honor his grandfather, who is buried in an unmarked grave in Boston, MA.

“He was one of the original boys of summer,” said McCarty. “He deserves to be remembered for his contribution to the game.”

Heritage Auctions is the largest auction house founded in the United States and the world’s third largest, with annual sales of more than $850 million, and 950,000+ online bidder members. For more information about Heritage Auctions, and to join and receive access to a complete record of prices realized, with full-color, enlargeable photos of each lot, please visit HA.com.