Jordan, Brady, DiMaggio, the Big O – all of these museum-caliber photo matched jerseys will be offered in Heritage’s upcoming February 22-23 Platinum Night Auction. In addition, one of our favorite matched jerseys to be offered during the highly anticipated event will be The Say Hey Kid’s flannel that represents the season he hit a career-best 52 home runs and was named the 1965 National League Most Valuable Player. 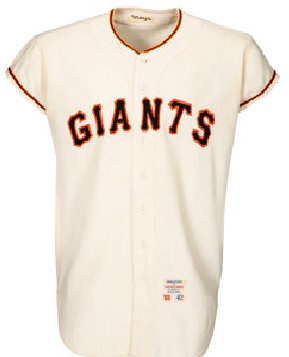 This home white beauty exhibits “moderate to heavy wear” from a tense pennant race with fellow California transplants the Los Angeles Dodgers, who would ultimately edge out the Giants by two games. But the classic design is effectively unchanged from those Polo Grounds days, with black-on-orange identifiers announcing “Giants” on the chest and the fabled number “24” on verso, properly retired by the franchise in 1972. The minor separation of stitching on these rear digits accounts for the sole point deducted in MEARS’ soaring assessment. “Mays” appears in embroidered script on a felt swatch affixed to interior collar, while a “Tim McAuliffe” label rests atop twin subtags denoting vintage (’65) and size (42). And we should direct attention to the stubby sleeves favored by 1960’s sluggers, abridged to showcase Mays’ bulging biceps on those rare warm days that the northern California climate allowed.

The experts at Resolution Photomatching have affirmed matches to photography from three games: 7/22/65 vs. Reds, August 19, 1965 vs. Dodgers (HR off Drysdale) and April 3, 1966 (spring training).

In every regard, this is a Cooperstown-quality garment that finds the greatest talent of the post-war era at the absolute pinnacle of his peerless abilities.