Goldin Auctions is proud to be offering a spectacular piece of what may be the biggest moment in American sports history. At the height of the Cold War the United States Men’s Hockey team defeated the daunted Russians in the ultimate modern David vs. Goliath saga before going on to defeating Finland for the Gold. The Gold Medal belonging to team Center Steve Christoff will be up for bids in the Goldin Auctions 2020 Winter Auction from January 20th through February 22nd at GoldinAuctions.com.

The catalyst for the team’s monumental comeback, Christoff had been one of the most sought after high school hockey players in the country upon graduation in 1976. As part of the prestigious 1979 University of Minnesota Golden Gophers, Christoff scored the game winning goal in the 1979 NCAA Championship. Christoff then put his pro career on hold to represent his country in the 1980 Olympics and the rest is, quite literally, history. He scored a goal and added an assist in the Gold Medal game vs. Finland cementing his place in the history of hockey, the Olympics, and American sports as a whole. 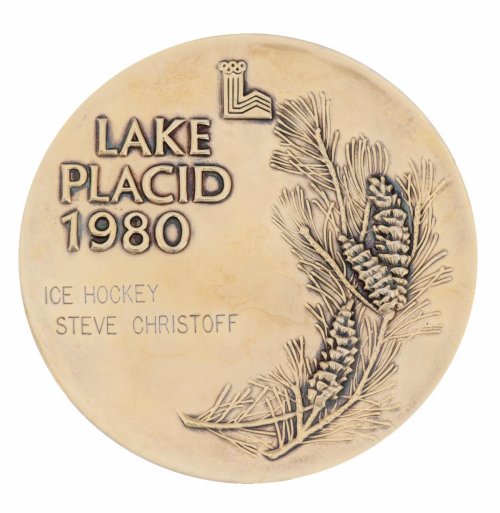 The 2004 movie “Miracle” starring Kurt Russell portraying legendary head coach Herb Brooks captures the story of this team of destiny and has brought it to an entirely new generation of sports fans. The actual Gold medal awarded to Christoff at the Lake Placid Olympic Games in 1980, a Tiffany & Co. made gold medal reading “XIII OLYMPIC WINTER GAMES” on one side and “LAKE PLACID 1980 ICE HOCKEY STEVE CHRISTOFF” on the other, will be available for preview online on January 18th.

“It always special when both the history of sports as well as our country is represented in the same piece,” said Ken Goldin, Founder of Goldin Auctions. “I am confident this medal will end up in the hands of someone who appreciates both!”