Goldin Auctions and Time Warner Cable have come together to bring back a bit of the magic of 1986. Before Goldin Auctions sells Keith Hernandez’s 1986 World Series Trophy at auction, the sports auction house will display the rare artifact, through November 1, for fans to enjoy just a short distance from Citi Field at the Time Warner Cable store located inside Queens Center (90-15 Queens Blvd) in Elmhurst, Queens.

“We hope that fans appreciate the opportunity to see, and even get their picture taken with this unique piece of baseball memorabilia,” said Brien Kelley, Area Vice President of Operations for Queens and Brooklyn, Time Warner Cable. “We invite all Mets fans to come visit our store at Queens Center to take a photo with the trophy and, mostly importantly, bring the Mets good luck this weekend.” 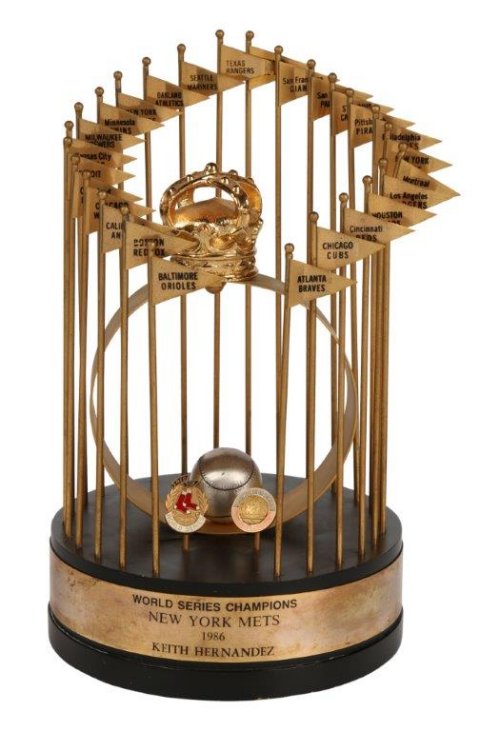 The auction, which includes more than 1,500 lots of sports and historical memorabilia, has several other unique Mets items including; a 1986 World Series game 6 used baseball signed by Mookie Wilson and Bill Bucker, and a 1986 Mets yearbook signed by 34 players. The auction is live through November 14th, at GoldinAuctions.com.

“We have displayed a Babe Ruth bat and a T-206 Honus Wagner card in New York in the past and the response from fans has been great,” said Ken Goldin, Founder of Goldin Auctions. “Since most World Series trophies are on players’ mantles at their home, we are thrilled to give Mets fans a chance to see one from one of the most popular players in Mets history.”