A 1986 Michael Jordan rookie trading card set a world record Sunday, Aug. 30, when it sold for $420,000 at a public auction of sports memorabilia held by Heritage Auctions in Dallas, Texas.  That smashes the previous record set in May, when Heritage sold a 1986 Fleer Michael Jordan No. 57 PSA Gem Mint 10 for $96,000.

“The Michael Jordan rookie card came to us ungraded, and we knew it was special from the very first moment we saw its condition,” said Chris Ivy, Heritage’s Director of Sports Auctions. “The SGC Pristine 10 Gold Label grade represents the best of the best, and that was reflected by the world-record price.” 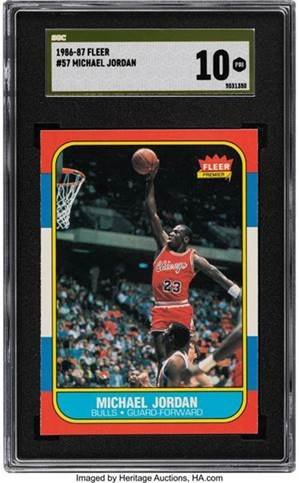 No doubt the endless streaming of The Last Dance continues to impact Jordan’s popularity and collectability, and if ever one needed proof that 2020 was, among many other things, The Year of MJ, look no further. In April, best-ever Jordan rookie cards were setting records merely by surpassing the $50,000 mark. A coveted card has become a golden ticket for some collectors. That was evident throughout the first night (and early morning) of Heritage’s Platinum Night Sports Collectibles event.

Jordan might have retired in 2003. But that hasn’t stopped him from racking up more titles in 2020.