Just ahead of his certain election to the Baseball Hall of Fame, one of 22 1993 Upper Deck SP Derek Jeter rookie cards graded 10 by PSA sold for a record-setting $180,000 as Memory Lane closed out the hobby’s first major auction of 2020 early Sunday morning.

The SP Jeter saw records established and fall three times in a span of five weeks, with the Memory Lane sale topping PSA 10 Jeter cards that sold for $138,000 and $168,000 last month. The $180,000 price is more than five times the prices typically attained for similar auctions just five years ago.

Jeter is expected to be the top choice in the upcoming Baseball Hall of Fame balloting which will be announced on January 21.

Over 1,300 lots were offered in the auction, which generated over $2.9 million including the 20% buyer’s premium added to each winning bid. 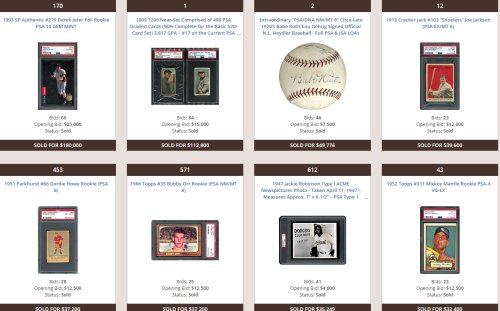 A rare complete set of 1921 Tip Top Bread Baltimore Orioles including three previously unknown cards sold for a total of over $58,000 including the Lefty Grove pre-rookie card which generated over half of the total amount in a separate listing.

The market for vintage photos remains strong as evidenced by several results including $35,249 for an April 11, 1947 Acme News Type I photo of Jackie Robinson symbolically entering the Dodgers clubhouse for the first time. Two photos of Babe Ruth during the earliest days of his big league career with the Boston Red Sox sold for over $52,000 combined.

Two dozen vintage Mickey Mantle cards were in the catalog including some of his earliest issues and a 1966 Topps #50 PSA 9 which sold for an eye-popping $12,535.

In addition to the Jeter sale, another modern era card also generated strong attention from bidders. A 1996 Topps Chrome Refractor Kobe Bryant rookie card (PSA 10) generated a bidder battle that ended with a realized price of $21,576.

Complete auction results and information on consigning to the company’s next auction can be found on Memory Lane’s website.