(Written bu Rich Mueller of Sports Collectors Daily) – No one’s saying it’s the most beautiful, but there’s a new top dog in the category of most expensive Michael Jordan basketball cards.   A 1997 Skybox Metal Universe Precious Metal Gems (Green) Michael Jordan card earned the title after selling for $350,100 on eBay (via PWCC) late Wednesday night.  It’s the most ever bid for a single Jordan card at public auction and the third most expensive basketball card ever sold.  Buyers had to be pre-approved to participate. Twenty-two people placed a total of 130 bids over the seven-day period.  The winning bidder was believed to be Nat Turner, a wealthy and avid collector/investor.

“In the world of trading cards this is a ‘true holy grail’ caliber asset, said Brent Huigens, CEO and Owner of PWCC who sold the card. “Most advanced investors have never seen one before and this was the first copy we’ve handled in 20 years. Arguably the most recognized and revered modern trading card in the world.” 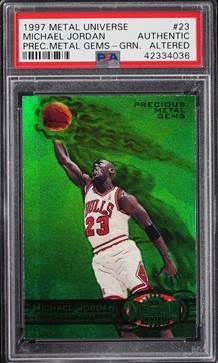 Carrying an Authentic grade from PSA, the serial-numbered (6/100) Jordan is one of only ten green or “Emerald” varieties created as part of the PMG parallel cards that were rare inserts randomly packed inside Metal Universe boxes more than 20 years ago.  Ninety others bear a red background and also carry a substantial value, but nothing close to the Emerald version.  Jordan was one of 123 cards in the set.

The last PMG Emerald Jordan sold privately for a “low six figure price” a few years ago.  No others have been offered for sale in recent years.

The card was recently graded by PSA which labeled it Authentic instead of presenting a numerical grade because of “irregular wear to the right edge,” according to PWCC which also stated “we respect the opinion of PSA, though we attest that from our review this card does not appear altered.”

Boxes of 1997-98 Metal Universe basketball originally retailed for $2.49 per pack with 24 packs per box.