In what is quite possibly the company’s most eclectic auction ever, the 2015 Goldin Auctions Opening Day Auction features more than 1,450 lots of sports and historical memorabilia from such legendary figures as John D. Rockefeller, Babe Ruth, Walt Disney, Mickey Mantle, The Beatles, Ted Williams, and even Michael Jackson. The auction went live on April 13th at www.GoldinAuctions.com and closes on May 9th.

“Whether you collect historic baseballs, game-used items, championship rings, rare trading cards, Disney memorabilia, Presidential and historical artifacts or even the Beatles, this auction has something for everyone,” said Ken Goldin, Founder of Goldin Auctions. “We encourage collectors to check out the wide array items, as many are newly discovered, and offered for the first time.” 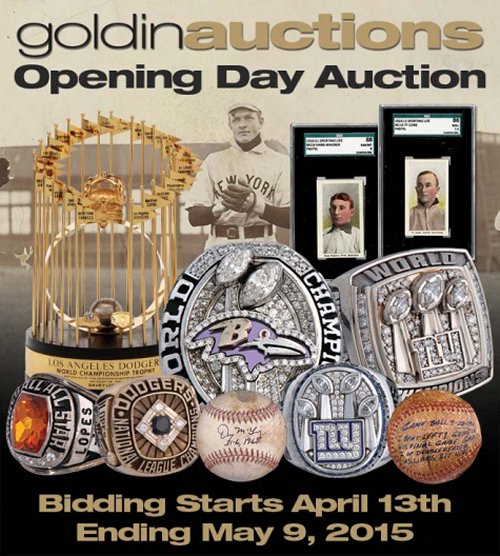 For history buffs, the offerings are just as unique. Among the rare finds are one of the earliest known photographs of oil magnate/philanthropist John D. Rockefeller; a signed military document from Napoleon Bonaparte; a signed CDV of General Robert E. Lee; a Naval appointment document signed by Thomas Jefferson; and much more.

Music and entertainment collectors can add historical documents to their collections such as the contract signed by Michael Jackson for the album Thriller; the 1940 contract naming Walt Disney the President of Disney Productions; a 1963-64 Beatle Fan Club card signed by all four Beatles on the front; and many other such items.

Here’s a closer look at some of the marquee items. For more detailed descriptions or to receive afree catalog, visit www.GoldinAuctions.com.

Lot #16 – 1854-56 John D. Rockefeller Daguerreotype – During his youth in the mid-1850’s, the boy that would become legendary oil magnate and philanthropist John D. Rockefeller only had his photograph taken a few times.  Remarkably, more than 160 years later, one of the earliest known photographs of Rockefeller has been uncovered. An exhaustive analysis of this daguerreotype image with both 2-D and 3-D modeling identified it as John D. Rockefeller by comparing it to several later Rockefeller images.  The computer analysis takes into account a normalizing of the face, the size and location of the facial features, lines and marks in the face itself, hairlines and changes that might come with age.  The revealing video analysis and written detail of the facial recognition analysis is available on the Goldin Auctions website.

Lot #4 – 1940 Walt Disney Signed Contract Naming Him President of Walt Disney Productions – By 1940 Walt Disney and his gang of cartoonists had single handedly ushered in the “Golden Age” of animation. This incredibly important contract from March 29, 1940 names Walter E. Disney president of Walt Disney Productions. The 8 Â½” x 13″ document is typewritten on onion skin and is in excellent condition. Beautifully preserved for over 70 years, it is signed “Walter E. Disney” in his trademark whimsical hand. The signature is bold and large and looks to have been in a gold colored ink.

Lot #5 – 1965 Mickey Mantle Signed Player Contract – This moment marked a fork in Mantle’s historic career. 1964 was a typical season as “the Mick” hit 35 homers, drove in 111 runs while batting .303. He then hit .333 and slugged 3 homers in a World Series loss to St. Louis. It would mark his last World Series and final 30/100/300 season. The Mick’s spectacular season ensured that his Yankees contract for 1965 gave him the same $100,000 salary he received the previous year. This standard 4-page Uniform Player’s Contract is the document Mantle signed for the upcoming 1965 season. The contract is signed in black ball point by Mantle (10/10), Yankees GM Ralph Houk (10/10) as well as Hall of Famer and President of the American League Joe Cronin (10/10). Letter of Authenticity U06428 from PSA/DNA.

Lot #11 – Game-Used Ball from 1941 Game when Ted Williams Batted .406 – On September 28, 1941 Ted Williams went 6 for 8 in a double-header to finish the season batting .406. That game was also the last game pitched by the great Lefty Grove. Unknown to most, it was also the greatest moment in the short career of A’s pitcher Fred Caligiuri. And thanks to Caligiuri, this baseball from that day has survived.  Despite giving up two hits to Williams in three at bats, Caligiuri, pitched a 6-hit complete game for his second and final career win. To commemorate his greatest moment, he saved this baseball and in blue pen he proudly inscribed is “GAME BALL 9-28-1941 I BEAT LEFTY GROVE IN HIS FINAL GAME. GAME 2 OF DOUBLEHEADER WILLIAMS HIT 406.” The winning pitcher then added his signature to the ball’s sweet spot to complete its provenance.  Comes with full LOA from JSA which confirms the signature of Fred Caligiuri, and the inscription was written by him.

Lot # 529 – 1914-15 Babe Ruth/Ty Cobb Signed Baseball – There is no doubt about the lineage of the Caligiuri baseball, there is some question as to whether as baseball signed by Ruth, Cobb and others is dated 10/6/14 or 10/6/15. Regardless of the date, there is no doubt that it is among the earliest Ruth signed balls ever offered at auction and a rare ball from his early Red Sox career. Also signed by Cobb’s Tigers teammates, Hall of Famer Harry Heilman, Oscar Vitt, Donie Bush , Howard Ehmke , Jean Duboc, and Hooks Dauss, it is a Ban Johnson Reach Official A.L. ball from 1913-1917. Goldin Auctions believes the ball is clearly dated “Oct 6, 1915”. JSA feels the date is written as “Oct 6, 1914” and PSA was non-committal on whether the last digit of the year is a ‘4’ or a ‘5’. If the ball is from 1915, it would be from the historic day when the Red Sox clinched the A.L. pennant with Ruth pitching a complete game and driving home the winning run for the Red Sox over the Yankees. Since the second-place Tigers season had ended three days earlier it would make sense for them to be in attendance at the game to see if they would make it to the World Series. Regardless of the date, it is a very special and historical baseball that if dated 1914 is one of the earliest known signed Ruth balls or if dated 1915 it is an historic ball from the day Ruth clinched his first ever World Series birth. Comes with a full LOA from PSA/DNA and JSA.

Lot # 1 – 2014 Clayton Kershaw Game-Used Jersey from Opening Day – Worn by Kershaw for his first win of his Cy Young Award season versus Arizona in Australia. The game-used Kershaw jersey shows light evidence of game use, with a faded dirt stain on the rear left hip, and is verified under the MLB Authentication program, number “HZ022550.”

Lot #6 – 2004 Albert Pujols World Series Game-Used Glove — Pujols used this Rawlings professional model PROCMHCTLSO first baseman’s glove during the 2004 and 2005 seasons in which he won the first of his the three league MVP awards and appeared in the World Series. The glove was given by Pujols to teammate Einar Diaz, who has signed an LOA that accompanies this glove. It has been photo-matched to being worn by Pujols for the 2004 season and World Series, and the beginning of 2005. It comes with a full LOA from PSA/DNA authenticating its game use.

Lot #10 -Hakeem Olajuwon’s NBA 50 Greatest Players Autographed Lithograph – In 1996 the NBA honored the 50 greatest players in league history and awarded each of them one of these lithographs signed by 49 of the 50 players (except Maravich) plus NBA Commissioner David Stern. It is rare when one of these becomes available

Lot#799-823 – 1910-11 M116 Sporting Life Trading Cards – A recent find of 244 of the 100+ year-old cards is being offered in 25 different lots. The top player like Cobb, Wagner, Speaker and Johnson are being sold as single lots while many of the lesser-know players are being offered in lots of as many as 52 cards.

Lots 27-28 – 2007 & 2011 NY Giants Super Bowl Rings – A pair of Super Bowl rings from NY Giants running back Danny DJ Ware are being offered for sale in two different lots. The rings are presented in the original display boxes.

Lot #952 – Babe Ruth’s Humidor Presented by the City of Boston in 1919 – In addition to being legendary for his mammoth home runs, Ruth was one of the most famous cigar smokers. This sterling silver humidor measures 7 1/2″ x 3 1/2″ x 1″ and is lined with wood. The top of the hinged lid has The Babe’s initials “BR” in raised letters flanked by two bats. The inside of the lid is engraved “To The Babe Happy 24th Birthday Best Wishes The City of Boston.” The surface shows a lifetime of use with scratched and tarnishing – call it “game used” if you will. Accompanied by a photograph print of a young Babe Ruth hand rolling cigars.

Lot #14 – 1982 Thriller Contract Signed by Michael Jackson and The Jackson 5 — Signed on September 29, 1982, this 5-page document hammers out deal for the biggest selling album of all-time – “Thriller”. Referred to as “The Michael Jackson Album” in lieu of a name. Comes with the original cover page signed by famed entertainment lawyer John Branca – brother of MLB pitcher Ralph Branca. On the signature page, Michael and his brothers Randy, Marlon, Tito and Jackie, have signed in a stacked row on the right of the page. Then, perhaps as a declaration of his independence from the family group, Michael signs a second time in huge script letters taking up the entire width of the page. The signatures are in a perfect preserved 10/10 condition.

Lot #1248 – Napoleon Bonaparte Military Document – The French general has boldly signed this manuscript document with his rare full last name signature. Signed in the observation column, “Apr., Bonaparte,” and also signed by three others in black quill pen, Napoleon signs his approval to this military decree represented on this two-sided, untranslated manuscript in French. The document is framed with a vintage engraved print of Napoleon, titled “Napoleon in Fontainebleau.” Framed 30 X 23. Comes with full LOA from JSA.

Lot #1251 – Robert E. Lee Signed CDV – Robert E. Lee secured his fame as the commander of the Confederate Army of Virginia during the Civil War during his three decade military career.  Long before the era of modern photography, images of such admired figures were captured on items known as carte-de-visites (CDV), or visiting cards. These cards measured roughly 4″x2.25″ and consisted of an albumen print, a thin paper photograph mounted on a thicker paper card. Items autographed by General Lee, particularly CDVs, are rare and extremely sought-after collectibles. Signature authenticated by PSA.

Lot #1434 – President Thomas Jefferson & Secretary of the Navy Robert Smith Signed Display – The third U.S. President signed the lower portion of this this 3″x12 Â¼” naval appointment document along with Secretary of the Navy Robert Smith.  Alongside a portrait of Jefferson is an engraved plaque which notes his birth and death date and quotes his tombstone: “Here was Buried Thomas Jefferson Author of the Declaration of Independence, of the Statute of Virginia for Religious Freedom and Father of the University of Virginia”. All three elements have been impeccably matted and framed to 15″ x 22″. Letter of Authenticity from PSA/DNA.

Lot #1245 – Autograph Album Signed by Abraham Lincoln, Mark Twain and more – The 122 page album is signed mostly on one side of the page with some signatures glued on. Some are dated. Signatures include Abraham Lincoln, Mark Twain, James A. Garfield, Salmon P. Chase, Edwin M. Stanton, Gideon Welles, Thomas A. Hendricks, Henry Wilson, John Sherman, Charles Sumner, Schuyler Colfax, A. Bronson Alcott, and Charlotte Cushman. Comes with a LOA from JSA.