Headlined by the three biggest names in the sports collectibles world, Babe Ruth, Mickey Mantle and Michael Jordan, the 2015 Goldin Auctions Summer Live Premium Auction at the Muvico 18 Theater in Rosemont, IL, saw several record prices realized in route to generating more than $3 million in sales. A corresponding online auction at www.GoldinAuctions.com with 1,200 additional lots will close on August 8th.

“The National Sports Collector’s Convention is the annual event where sports memorabilia takes center stage and the biggest and most passionate collectors gather to build their collections and celebrate the hobby,” said Ken Goldin Founder of Goldin Auctions. “It was clear from the fevered pitch of the bidding from people in the room, online and on the telephone that this was a collection of memorabilia worthy of the occasion.” 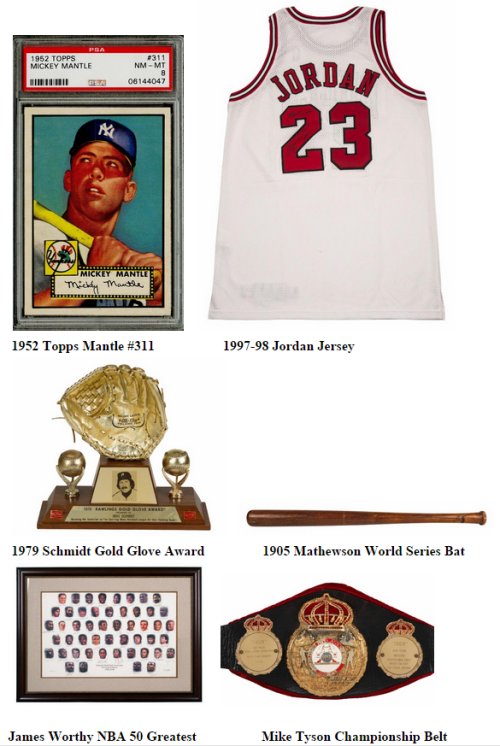 Goldin Auctions is currently accepting consignments for its October Auction. To consign an item, visit www.GoldinAuctions.com, call 856-767-8550 or email info@goldinauctions.com.

Here’s a look at some of the marquee items and the final prices realized:

Lot #40 1905 Christy Mathewson Game-Used World Series Bat ($218,700) –Mathewson passed this bat around during the 1905 World Series locker room celebration and had several of his teammates sign it including Hall of Fame manager John McGraw, who signed and dated the bat “Oct. 14 -05”. This is the first time the bat has been offered for sale and it is oldest World Series bat in existence.

Lot #68 – Ichiro Suzuki 2001 Gold Glove Award from his MVP/Rookie of the Year Season – believed to be the first Ichiro award/trophy to ever be available at auction($40,095)