“We are thrilled that so many different collectors participated and won,” said Ken Goldin, Founder of Goldin Auctions. “The rare premium items in our live auction coupled with the diverse and unique lots we offered online made for a perfect combination to attract a wide variety of collectors. It’s a great event when bidders are excited for their win and our consigners are satisfied with the prices realized.”

Here’s a look at some of the key items and the final prices. For a look at the entire auction catalog, visit www.GoldinAuctions.com. The company is currently accepting consignments for its upcoming auctions.

Lot #20 – 1939 Lou Gehrig All Star Game Presentation Pin – This pin is unique in that it is the only pin or ring not donated by Lou’s widow to the Hall of Fame, as it was given to one of the nurses who took care of him in his final days. It had remained in her family until her nephew sold it in 1989. (Final Price: $171,500)

Lot #23 – Joe DiMaggio & Marilyn Monroe Marriage Certificate – This is the official document that bound the two icons in marriage. Dated January 14, 1954, this State of California Certificate certifies that Joseph DiMaggio and Norma Jeane Dougherty were a married couple. (Final Price: $122,500)

Lot #4 – 1928 Jimmy Foxx Game Used Hillerich & Bradsby Factory Side Written Bat (GU10) – An incredible bat used by Foxx at the very beginning of his Hall of Fame career that comes with a full LOA from PSA/DNA for the game use and a grade of perfect GU 10. (Final Price: $108,000 – a record for any Foxx bat public sale).

Lot #41 – 2017 Team USA World Baseball Classic Lucky Eagle – This 24-inch tall, 45-pound porcelain sculpture was the “lucky charm,” accompanying Team USA around the country during their triumphant run to the WBC title. The eagle is signed by 28 team members including; Posey, Kinsler, Stanton, McCutchen and Stroman. 100% of the high bid price was donated to the St. Jude’s Children’s Research Hospital. (Final Price: $62,475)

Lot #9 – Barry Bonds HR #716 Bat and Complete Uniform – Barry took great pride in chronicling and saving historic mementos from his journey. The lot includes the bat, complete uniform and batting gloves worn by Bonds on June 5, 2006, when he hit career home run #716 off Marlins pitcher Brian Moehler. It’s the only certified game used bat attributed to a home run 700 or higher ever offered for sale. All items include the inscription “6-5-06 #716” in silver marker. Comes with personally signed LOA from Bonds as well as MLB Authenticated and Bonds holograms. (Final Price: $51,450)

Lot #102 – Tupac Shakur Hand-written Lyrics to “Cradle 2 the Grave” – The lyrics here represent Tupac’s full verse on “Cradle 2 The Grave”, which charted at 25 on the Billboard Hot Rap Singles, in its entirety. Tupac performed the first verse of this song, later ceding the spotlight to his fellow “Thug Life” members. (Final Price $20,250)

Lot #56 – Tupac Shakur Hand Written 2-Page Lyrics to “Pain” Written for the Movie Above the Rim – Offered here are two pages of handwritten lyrics to “Pain” that represent the original draft of the song. The first page features Tupac’s first verse, while the second page features the third verse of the song, also performed by Tupac. The first verse is written in black and blue pen, with the second verse written solely in black pen. Each page of lyrics comes with an individual LOA from JSA (Final Price $18,000) 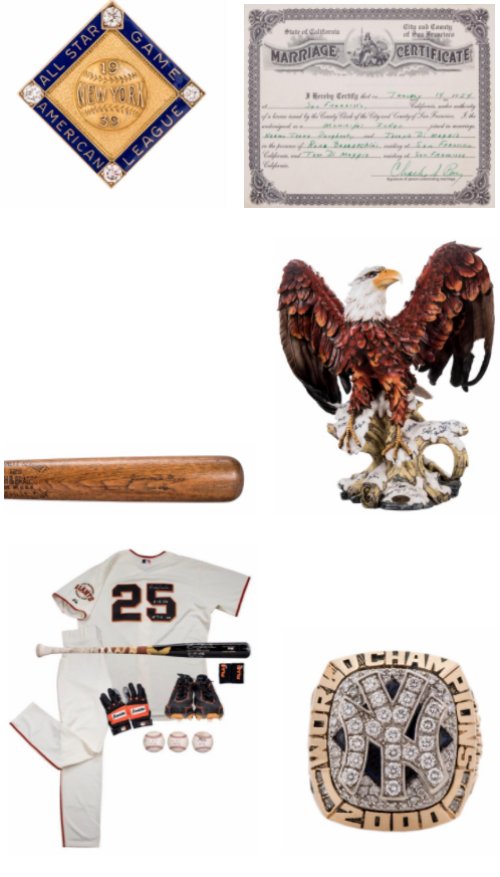