As the 45th President is inaugurated this week, the 2017 Goldin Auctions Winter Auction features a wide array of historic memorabilia from nearly a dozen President, past present and future. Among them is (Lot #1357) a Donald Trump Signed Presidential Oath of Office Card signed by the President-elect well-before he formally takes the oath.

Trump signed this photograph of the “Presidential Oath of Office” in November of 2015 for a supporter at one of his rallies, a full year before the election. The presidential seal is prominently displayed in full color on the top of this photo and typed below the “Presidential Oath of Office” reads “I Donald J. Trump, do solemnly swear that I will faithfully execute the Office of President of the United States, and will, to the best of my ability, preserve, protect and defend the Constitution of the United States of America. So help me God. January 20, 2017.” Trump’s signature is directly below the oath, which is printed in black on a bright white backdrop. This item comes with a full LOA from JSA 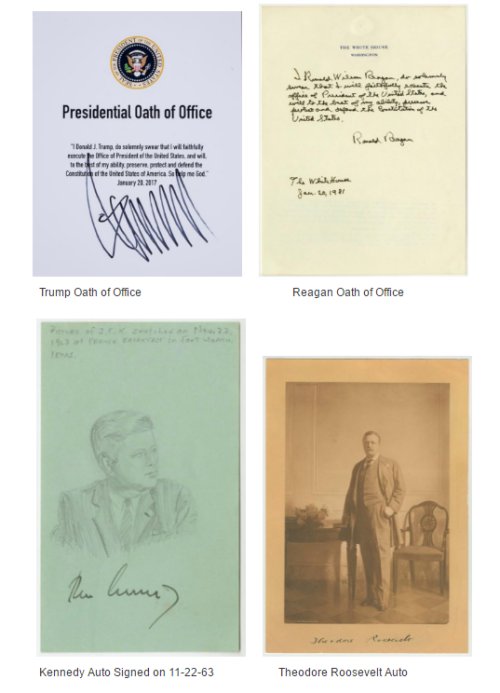 “With just 44 men having held the highest office in the land, Presidential memorabilia is always in demand from collectors,” said Ken Goldin, Founder of Goldin Auctions. “We’re proud to share these items – some that are rare historical artifact and others that are fun keepsakes — with collectors.”

Here’s a look at some of the other Presidential memorabilia up for bids at www.GoldinAuctions.com through January 28.