An official 2017 New England Patriots’ Super Bowl Ring, ordered by the family of Tom Brady, is the headline item among the 1,100 lots for sale in the Goldin Auctions 2018 Winter Auction from January 22 through February 17, at GoldinAuctions.com.

The ring is not the official ring presented to Brady, but rather an additional ring ordered by a Brady family member and approved by Tom Brady. It is displayed in a presentation box with an official Jostens’ Certificate of Authenticity and appraisal made for Brady. A search of public databases found this to be the first Tom Brady ring or award of any type that has ever been offered for public sale.

‘The comeback engineered by Brady in Super Bowl LI was perhaps the greatest achievement in the career of the greatest quarterback in NFL history,’ said Ken Goldin Founder of Goldin Auctions. ‘This is the first Official 2017 New England Patriots Super Bowl ring to be sold at auction and the fact that it was made for a Brady family member and features Brady’s name on the shank, makes it a truly once-in-a-lifetime opportunity.’ 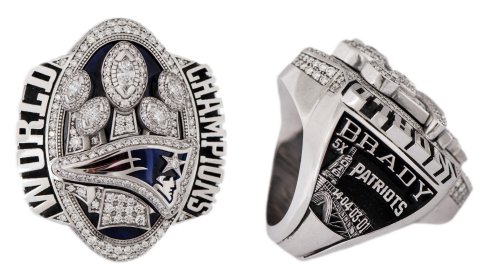 The size 10 ½, ring weighs approximately 77.3 grams and features 260 diamonds. The perimeter of the ring is surrounded in diamonds forming the shape of a football with the images of five Lombardi trophies, all covered in diamonds. The left shank features ‘Brady’ and ‘Patriots’ with an image of the lighthouse and bridge, the signature view of Gillette Stadium and accented with ‘5X’ and the years of each Patriot Super Bowl win. The right shank has in raised relief the ‘Super Bowl LI’ logo, “NE 34”, “ATL 28” with the phrase “Unequivocally the Sweetest” surrounding the Super Bowl LI logo. Capping off the right shank is ’17-2′ the Patriot’s overall record. The inside of the ring has engraved in the center “We are all Patriots” with Bob Kraft’s signature and ‘2-3-2002’. Also engraved is “Greatest Comeback Ever.”

A full description of the Brady ring and photos are available here. For an auction catalog, visit GoldinAuctions.com. The company is also currently accepting consignments for its 2018 auctions including the Jackie Robinson Contract Auction. 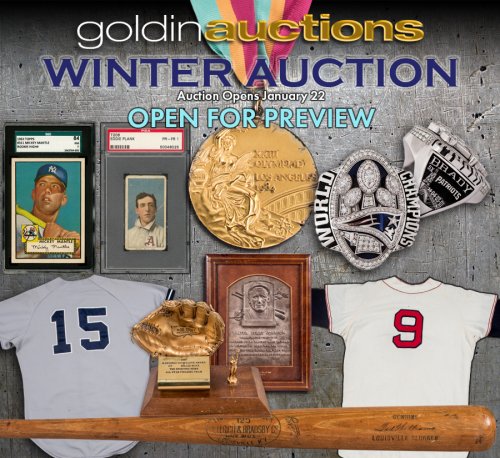