To keep up with the extensive demand from both consignors and customers, Goldin Auctions today opened for bidding its first-ever Goldin Auctions March Internet-Only Auction featuring 775 lots of sports, entertainment and historical memorabilia at GoldinAuctions.com. The two-week event is the first of four such quarterly internet-only auctions scheduled for this year to accommodate items that do not make it into the company’s catalog auctions, or a re-offering of items that did not sell previously.

“Our continued growth made it impossible to accommodate all of the consignments we are receiving in our catalog and live auctions,” said Ken Goldin, Founder of Goldin Auctions. “These four internet-only auctions will allow consigners to sell items on short notice and collectors to find unique items and great deals at a variety of price points.”

The auction is open for bidding through March 24 at GoldinAuctions.com. Minimum bids on more than 500 of the items are $100 or less. To consign an item to live, catalog or internet-only auctions, contact Goldin Auctions at info@GoldinAuctions.com. 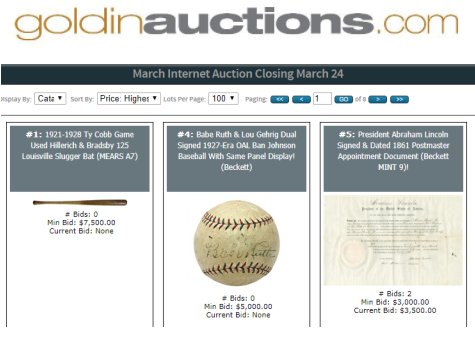