Hank Aaron rookie card PSA 9Cards from the finest basic collection of Hank Aaron cards on the PSA Set Registry drew a gathering of hungry bidders with the 1954 Topps rookie card rising to a new record price of $228,000. In fact, ten Aaron cards graded 9 or 10 by PSA now have new high water marks thanks to this auction. In addition to the rookie card, five other Aaron cards sold for over $25,000 including:

In all, 24 records were set in the auction, which totaled over $2.9 million in sales, the highest grossing Memory Lane auction of all-time. 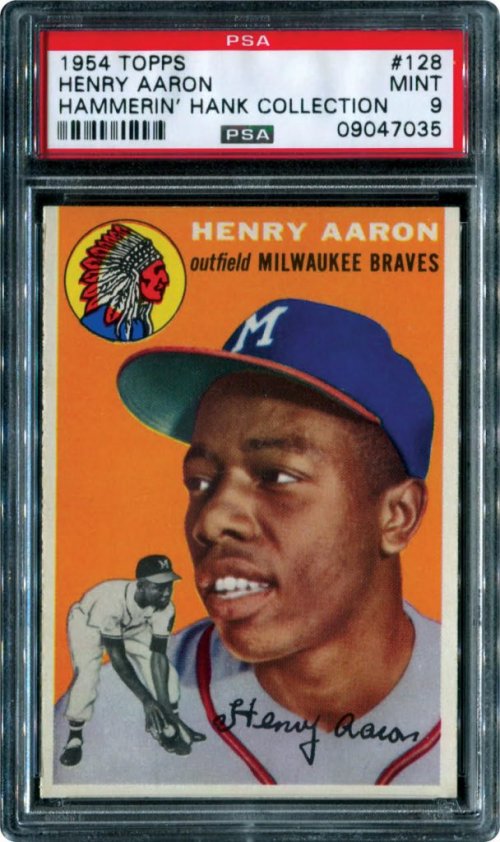 A PSA 9 1954 Topps Ernie Banks rookie card smashed a two-year-old mark when it closed at $94,800, more than doubling the previous mark.

Babe Ruth cards and memorabilia were once again popular. A rarely offered PSA 9 1948 Leaf Ruth broke a record when it blasted past the six figure mark, settling at $109,200 while a 1918 Charles Conlon photo of the young Ruth during his Boston Red Sox career hit $31,460.

The new records weren’t limited to baseball, however. AJohnny Unitas rookie 1957 Topps rookie card PSA 9 PSA 9 1957 Topps Johnny Unitas rookie card hit a milestone number, racing past the six-figure mark during the final hours of bidding until it realized a jaw-dropping $151,200. The Unitas was one of just seven graded at the 9 level, with none higher. The rookie card of another championship legend, Joe Namath, graded PSA 8, established a new plateau at $49,766. Hockey card collectors chased a PSA 9 1979-80 O-Pee-Chee Wayne Gretzky, which closed at $31,460.

All prices reflect a 20% buyer’s premium.

“The results of this auction were nothing short of amazing,” stated Memory Lane’s JP Cohen. “Even beyond the record prices there were a lot of great cards available. There are a lot of new collectors entering the hobby and demanding the best. They certainly found it in this sale.”

Memory Lane is accepting consignments for its upcoming I Own it Now catalog and it’s Summer Auction, coming up in a few months. For information on consigning or to be placed on the list to receive a free catalog, visit MemoryLaneInc.com or call 1-877-606-5263.