Featuring historic memorabilia from many of the most legendary names in sports history including Jesse Owens, Babe Ruth, Mickey Mantle, Michael Jordan, Serena Williams and Tiger Woods, the Goldin Auctions 2019 Holiday Auction lived up to expectations as the 1,500-lots of memorabilia generated $4.3 million in sales, with five items closing in excess of $100,000 and at least eight new industry record prices established.

“This was truly a remarkable event in both the wide assortment of items and the record-prices realized for so many of them,” said Ken Goldin Founder of Goldin Auctions. “We want to thank our consignors and bidders for making all of our 2019 auctions so successful. Every year our events keep getting better and we can’t wait for everyone to see what we have in store for 2020.”

Goldin Auctions is currently accepting consignments for its 2020 Winter Auctions which runs from mid-January through mid-February. The complete 1500-lot Holiday Auction catalog, with prices realized, is available at GoldinAuctions.com. Here are some of the highlights:

Lot #1 – 1936 Jesse Owens Olympic Gold Medal Originally Gifted to Olympic Teammate & Lifelong Friend John Terpak, Sr. (PSA/DNA) –Of the four, identical gold medals Owens won at the 1936 Berlin Olympics, the whereabouts of two have been lost to time. The third, which was gifted by Owens to friend Bill “Bojangles” Robinson. It comes with a Letter of Authenticity (LOA) from PSA certifying it as an official gold medal from the 1936 Olympics. (Final Price: $615,000)

Lot #153 – Charles H. Lightoller RMS Titanic 2nd Officer Personal Pocket Watch from 1912 Voyage – This swiss made pocket watch has the name “Charles H Lightoller” engraved on the reverse with “2nd Officer” shows oxidization and rust that could certainly be attributed to being under water. The face of the watch has a crack and the hands remain frozen in time reading 2:20 which certainly could have been the time the watch entered the near freezing water on the night of April 14, 1912. (Final Price: $173,430)

Lot #8 – Ty Cobb Single Signed Baseball (JSA & PSA/DNA MINT 9 Auto/ 8 Overall Ball) -This magnificent example is one of the finest single-signed Ty Cobb baseballs. His bold black steel-tipped fountain pen signature on the side panel of this Official Big Leaguer model ball simply leaps off the proverbial page. The ball itself displays only an ever-so-slight toning giving the ball a light cream-color. LOA from PSA/DNA and JSA. (Final Price: $36,900)

Lot #17 – 1966-67 John F. Kennedy Eternal Flame from the Presidential Memorial at the Arlington National Cemetery – The original Perpetual Flame Torch which stood vigil over President John F. Kennedy’s memorial in Arlington from 1966-67 when the current memorial was consecrated. (Final Price: $31,980) 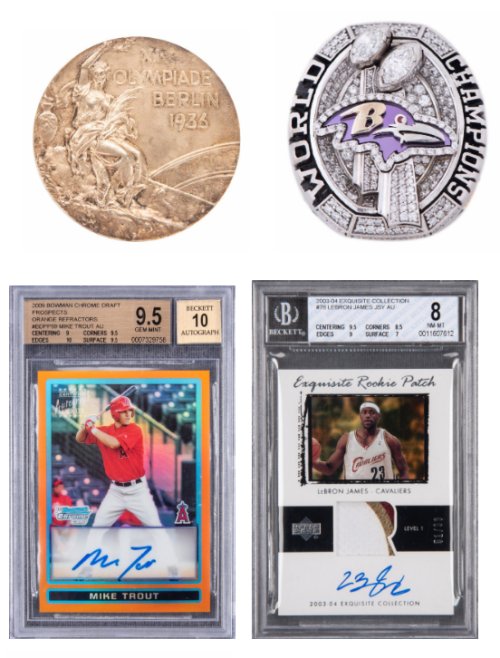