Throughout January, the best football teams will be battling on the field in search of a championship. Similarly, from January 11 through January 30, 2016, football fans and collectors will be competing online at www.GoldinAuctions.com as more than 200 lots of football memorabilia from Super Bowl and championship game rings to game worn jersey from football legends, and much more, are up for bids as part of the 1,400-plus lot auction.

Here are a few of the key football items up for bids this month. To register for the auction or to receive a free catalog, visit www.GoldinAuctions.com. 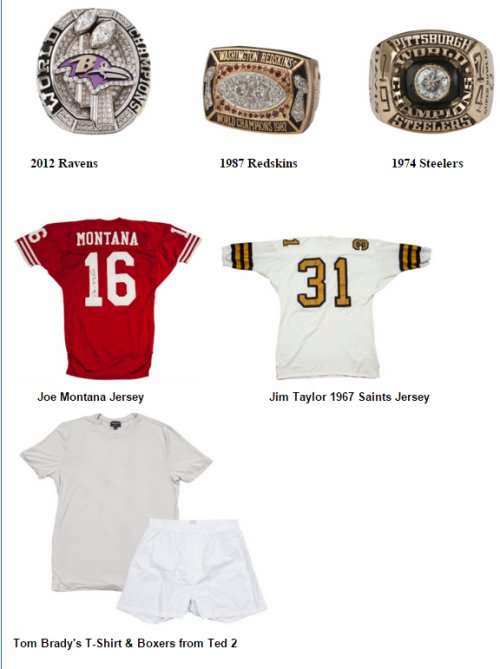 Lot #102 – 1974 Pittsburgh Steelers Super Bowl Championship Player Ring – Charles Davis -just the second player ring from the historic team to be offered at auction.Lot #1098 – 1991 Atlanta Falcons Scouting Report on Brett Favre – This hand-written report was integral in the Falcons selecting Favre in round two of the 1991 NFL Draft.

Lot #1338 – Tom Brady T-Shirt & Boxer Shorts from the Movie Ted 2- This is a pair of all-white Brooks Brothers size 36 boxer shorts and a grey Giorgio Armani size 58 t-shirt, both screen worn by Brady during his cameo role in the Universal film “Ted 2”. Attached to the shirt collar tag are production tags with the film, Brady’s name and scene information, as well as production photos of Brady wearing the items.

Lot #2 – 1990-91 Joe Montana Game Worn and Signed 49ers Home Jersey – This jersey was from Montana’s 1990 MVP season, his final as a starter for the 49ers. The jersey shows moderate game use, with many turf marks and contact scuffs visible. Montana has signed the “1” in black marker making this an outstanding gamer from the heart of Montana’s Hall of Fame career. LOA from game used experts MEARS who have given this jersey a perfect score of A10.

Lot #967 – 1967 Jim Taylor New Orleans Saints Game Worn Jersey – Better known for his Hall of Fame career with the Green Bay Packers, Taylor finished his career in New Orleans in 1967 after winning the first two Super Bowls with the Packers.

Lot #983/#987/Lot #994 – Eli Manning Game Worn and Signed Giants Jerseys – The white road jersey was worn by the two-time Super Bowl MVP during the 2005 season. The blue home jersey has been photo matched by MeiGray as the jersey he wore on 12/8/08 in the regular season finale loss to Philadelphia.

About Goldin Auctions
Sports memorabilia impresario Ken Goldin has sold more than $600 million in memorabilia from many of the biggest names in sports, history and pop culture and was the pioneer of using the medium of television to sell sports memorabilia. Over the past few years, Goldin Auctions sold Babe Ruth’s 1918 contract for a record $1.02 million, a Honus Wagner T206 card for a public sale record $2.1 million and a 1952 Topps Mickey Mantle Rookie Card for a then record price of $400,950. Goldin Auctions strives to break new ground and offer collectors the best in collectible treasures up for auction in the marketplace. All game worn or autographed items come with team, player, league or additional LOA from industry leading authenticators; and collectors can bid with confidence that their proxy/ceiling bids remain confidential. For more information, visitwww.goldinauctions.com.
TagsAndrew Luck Ben Roethlisberger championship rings Drew Brees game worn Goldin Auction Jim Taylor memorabilia montana reggie white Tom Brady