Any NFL player will tell you the ultimate prize in pro football is a Super Bowl ring. But the hefty hunks of 10K gold emblazoned with diamonds and iconic team imagery are not easily won. They’re even harder to obtain if you’re a collector of sports memorabilia. Almost always, if a Super Bowl ring is to be sold, it ends up at auction, where it’s likely to make the most money. Here are 5 Super Bowl rings whose auction prices made headlines:

Every Super Bowl player wants to “put a ring on it,” but not all fingers were created equal. Sometimes it costs the NFL just a bit more to spring for a World Championship ring. In 1985, the jewelers appointed by the NFL had to supersize the Super Bowl XX ring awarded to mighty Chicago Bears tackle William “Refrigerator” Perry. 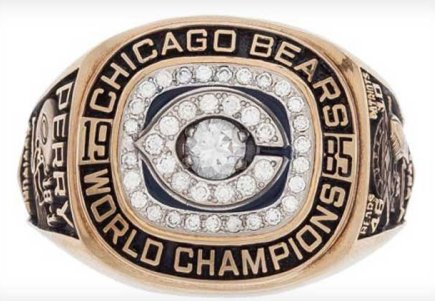 Reportedly, there wasn’t even a jeweler’s device capable of producing an accurate measurement of the Fridge’s ring finger, but the estimate was an unbelievable size 25. It was the largest Super Bowl Championship ring ever made.

Perry parted with his ring at some point, and it changed ownership multiple times after that. Most recently it was in the spotlight at Heritage’s July 30, 2015 auctionand claimed the gridiron super-prize for $203,150 (inclusive of buyer’s premium).

“That ring was destined for success. The provenance was impeccable,” said Grey Flannel’s president, Richard E. Russek. “To our knowledge, it was the first ring from Super Bowl I that had ever been offered at auction, but on top of that, it came directly from Steve Wright, who signed a letter of authenticity that went to the new owner of the ring.”

Although he hadn’t played for Baltimore since 2006, running back Jamal Lewis was awarded a 2012 Super Bowl ring by the Ravens in recognition of his long-standing affiliation with the team. Goldin Auctions of West Berlin, N.J., sold the ring in 2015 for $49,770.

“Super Bowl rings are among the most sought-after collectibles in the [sports collectibles] industry,” said Ken Goldin, founder of Goldin Auctions. “Although museums occasionally buy Super Bowl rings, for the most part it’s private collectors and NFL fans. The industry is thriving as more and more historical artifacts are unearthed and as professional athletes make their collections available for auction.”

Phil Michaelson noted: “Demand for collectibles is soaring. Thanks to mobile bidding, people who have an interest in certain items can bid remotely. They’re no longer tethered to their desks.”

Lelands in Bohemia, N.Y., has sold more Super Bowl rings than anyone else in the sports auction business. “That’s because we’ve been around longer than anyone else,” said Lelands’ owner Joshua Evans.

“In 2011, we sold the ring presented to Joe Gilliam for the 1975 Pittsburgh Steelers’ World Championship,” Evans continued. “It had everything going for it – two chunky diamonds sandwiching the Vince Lombardi trophy, the ultimate symbol of the Super Bowl – and it represented the perfect match-up with the blue-collar ‘Steel Curtain’ beating ‘America’s Team,’ the Dallas Cowboys. …The ring transcended sports memorabilia. Joe Gilliam was the second black quarterback ever to play in the NFL, which made it historically important.” The Super Bowl X ring sold for $38,423, but Evans believes if it were auctioned today, it would double that price. Nice investment!

There is a trend toward rings from the “storybook teams” and actual players’ rings versus front-office and coaches’ rings, even though the former are far more expensive. Also, collectors like “rings with content,” Evans said.

Why the extraordinary price? “Its mass appeal rested simply on the massive shoulders of the man who owned it, Hall of Famer Lawrence Taylor,” said SCP spokesman Terry Melia.

On February 20th, Heritage will take aim at SCP’s formidable record price when it auctions the 1967 Championship ring awarded to offensive lineman Jerry Kramer following the Green Bay Packers’ win in Super Bowl I. It’s the centerpiece of Kramer’s personal career collection and is expected to command a price in excess of $100,000.