The original Tony Curtis Cutout from the Cover of Sgt. Pepper’s Lonely Hearts Club Band, one of the greatest rock albums of all time, is expected to sell for $60,000 in Heritage Auctions’Entertainment and Music Memorabilia Signature Auction June 17-18 in Beverly Hills. The auction offers a large range of entertainment and music treasures, including a vast collection of Beatles novelties, Jimi Hendrix regalia, unique concert posters and legendary guitars celebrating the 50th anniversary of the “Summer of Love.”

“This auction is all about 1967’s ’Summer of Love,’” said Garry Shrum, Director of Music Memorabilia at Heritage. “That is the summer Hendrix and Janis Joplin changed music forever. Two years later, we were treated to Woodstock, but it all began the summer of ’67.” 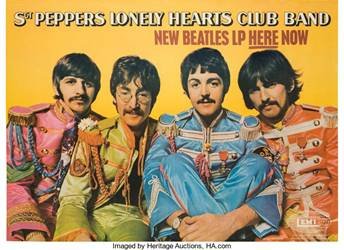 Among the one-of-a-kind items in the auction is the Curtis cutout. Paul McCartney commented about the album cover for Sgt. Pepper’s Lonely Hearts Club Band, explaining that he “wanted the whole of Pepper to be so that you could look at the front cover for years,” and 50 years after the album’s release, this statement could not be more accurate. In addition, a Beatles Signed “Ask Me Why/Please, Please Me” Parlophone Record (est. $32,000), a John Lennon-Owned and -Worn Two-Piece Track Suit (est. $30,000) and a Beatles Yesterday And Today “ Sealed Butcher Cover” LP in GEM MINT 10 Condition from Part I of one of the most complete U.S. Beatles vinyl collections in the world: the Stan Panenka Collection (est. $30,000). Artworks by Beatles members Paul McCartney and George Harrison includes an extremely unique piece of McCartney Original Art done while on a trip to India in 1968 (est. $19,000) as well as Harrison’s brightly colored sketch of two god-like eyes looking over a city in a valley drawn by whilst in Rishikesh, India (est. $19,000).

Another rare find is Gram Parson’s iconic 1969 Personally-Owned Blue Leather Jacket possibly made for him by Nudie’s Western Shop as Parsons was one of Nudie’s many famous clients (est. $4,000).

Concert Posters from the Summer of Love and more

Heritage also is offering a significant collection of uncommon concert posters such as a Jimi Hendrix/Janis Joplin Monterrey Pop Festival Poster from 1967 (est. $10,000); an Original Artwork For Nirvana At The Forum Concert Poster (est. $4,000); a Grateful Dead Trip Or Freak Concert Poster from 1967 (est. $4,000); a Big Brother And The Holding Company Concert Handbill from 1965 (est. $3,000) and a Grateful Dead Avalon Ballroom Concert Handbill signed by artist Stanley Mouse (est. $800).

A music memorabilia auction would not be complete without signature instruments, and at the top of the list is the James Jameson Owned and Played 1961 Fender Precision Bass (est. $20,000). This P-Bass from the master himself comes with serial number 60228, strap, case and photo archive. A Mick Mars-Owned and -Used Steel Lap Guitar from Mötley Crüe’s “Dr. Feelgood” tour is expected to sell for $12,000, and Nikki Sixx, another Crüe member, has a Used and Signed Guild Flying Star Bass from both the Shout at the Devil album and the “Dr. Feelgood” tour being offered, as well (est. $10,000). A Grateful Dead-Signed Fender Stratocaster Guitar makes an appearance (est. $5,000), as does another Fender Stratocaster guitar, but this time the Three-Color Sunburst Strat is signed by Texas legend Stevie Ray Vaughn (est. $4,000).

Marilyn Monroe has some iconic pieces being auctioned, as well. An Oversized Color Magazine Page from 1954 that was signed by Monroe is expected to sell for $5,000. Another relic from Monroe is a 1962 Decorative Rustic Chest in which Monroe reportedly kept her jewelry (est. $4,000).

Consigned directly to Heritage Auctions by Ed Gernon, the executive producer of the 2001 television movie Life With Judy Garland: Me and My Shadows, is a Tammy Blanchard pair of The Wizard of Oz Exact Replica Ruby Slippers (est. $2,000). The film’s production team went to exhaustive lengths to create an exact replica pair of the ruby slippers worn by Garland in the beloved 1939 classic. This attention to detail paid off as the film won an Emmy for “Outstanding Costumes for a Miniseries, Movie or a Special.”