Iconic and rare comic books and original art sold for $6,332,633 at Heritage Auctions Feb. 23-25, with the first appearance of Spider-Man and art by Frank Frazetta and Robert Crumb selling for $155,350 each.  “The auction exceeded our estimates by more than $1.2 million,” said Barry Sandoval, Director of Comics Operations at Heritage Auctions. “The market is red hot.”

A high-grade copy of Amazing Fantasy #15 (Marvel, 1962), CGC VF+ 8.5, sold for $155,350 during the first day of the sale. It was followed by Frank Frazetta’s oil painting Thor’s Flight, published on the cover of the paperback edition of Thongor in the City of Magicians by Lin Carter, which also sold for $155,350. Likewise a four-page complete story of original art by Underground Comix master Robert Crumb, closed at $155,350. 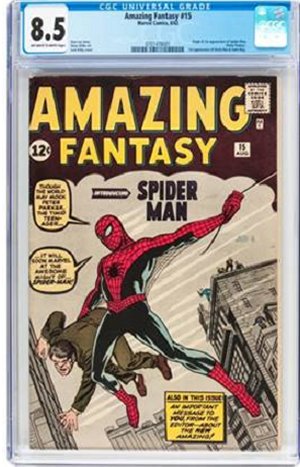 A small selection from the landmark collection of American cartoonist Richard Felton Outcault – considered by historians as the father of the American comic strip – realized more than $100,000 led by a Buster Brown Sunday comic strip original art dated Oct. 29, 1916, which sold for $35,850.