On Saturday night, February 18, the gavel will come down on 75 lots of memorabilia related to Babe Ruth in the Goldin Auctions Babe Ruth Auction. Five percent of each winning bid will be donated to the Babe Ruth Birthplace & Museum in Baltimore.

“We are honored to once again honor Babe Ruth with this auction and help support the great work of the Babe Ruth Birthplace & Museum,” said Ken Goldin, founder of Goldin Auctions. “This year’s auction is loaded with some unique items that have never been offered for sale before and will excite collectors, especially those with impressive Ruth collections.”

Headlining the 75-lot auction is Lot #3, the 1920 contact signed by Ruth and promoter Abel Linares for Ruth’s Cuban Barnstorming Tour – his first foreign tour. After a breakthrough season in which he smashed 54 homers, Ruth was paid $1,000 per game for the 10-game tour with John McGraw’s Giants against Cuban squads. Although the contract was saved, none of the money was, as true to his legend, Ruth gambled away his earnings at the casino, race track and Jai Alia before leaving the island. The one-page contract comes with a LOA from JSA and a photo of Ruth posed with Jai Alia players.

The auction also features 7 Ruth trading cards, 6 Ruth signed baseballs, nearly a dozen rare photographs, numerous items from the Yankees’ silver anniversary celebration, a dozen tickets stubs and more. Here’s a look at some of the auction highlights. For a look at the entire catalog, visit www.GoldinAuctions.com. Additionally, Goldin Auctions is currently accepting consignments for its spring auction.

Lot #1 – 1915 Babe Ruth Rookie-Era Type 1 Original News Service Photo – Measuring 6 1/2″  x 8 1/2″, it was first distributed in the fall of 1915 by International Film Service and retains a portion of the original paper caption: “[BOSTON] RED SOX EXPECT TO CLINCH [PENNANT].” A corresponding stamp and later editorial notations adorn the photo’s reverse. Comes with a LOA for Type I from PSA/DNA.

Lot #2 -Historic 1915 Babe Ruth & Father Type 1 Original Mounted Photo from Their Baltimore Tavern – Described by best-selling sports biographer Jane Leavy as “The only known [Ruth family] photograph of father and son,” the 7 1/2″ x 9 5/8″ image was taken in December 1915 by Baltimore photographer Vincent Velzis. It depicts proprietor George Sr. and financier George Jr. as almost mirror images. Mounted on an 11 7/8″ x 13 ¾” black backing, they wear matching barkeep outfits, lean one hand on the back bar, stare mirthlessly at the camera. 100% of the proceeds from this sale will be donated back to the Babe Ruth Birthplace & Museum.

Lot #4 – 1923-25 Babe Ruth Game Used Hillerich & Bradsby Pre-Model Bat — The experts at PSA/DNA have determined that based on the specifications and center brand stamping this Ruth gamer dates to the 1923 to 1925 period during which Babe hit 112 home runs – twice leading the league. The bat measures 35 inches in length and weighs in at a Ruthian 37.7 ounces. The stamping of “125” in the center brand indicate the bat was produced specifically for the player’s professional use. The center brand and Ruth’s facsimile signature have slight branding flaws, as the stamping was applied unevenly at the Louisville factory, making the “12” of the “125” in the center brand and the middle of Ruth’s signature shallower than the rest of the stamping. This bat comes with a full LOA from PSA/DNA who have graded this bat a GU 5 and a LOA from Mears, who graded this bat an A6.

Lot #5 – 1927 Ruth & Gehrig Dual Signed Oversized Photo Inscribed to Their Batboy – This amazing 11″ x 14″ oversized photo from that 1927 season shows young batboy Joe Glassenberg in the middle of Gehrig and Ruth, all three portraying their fiercest “game on” looks, with Joe dressed in his “NY” jacket and the players in their home pinstripes. Each slugger applied “To Joe From…” just before their signatures, each hand inscription and signature beautifully contrasting against the white pinstriped jerseys. This is arguably the greatest signed photograph of all time and was derived directly from the family of Joe Glassenberg, and was originally sold at auction in October 2007 for just under $39,000. Comes with full LOAs from PSA/DNA and JSA.

Lot #9 – 1930-32 Lou Gehrig Hanna Batrite “11” Georgia Driver Model Game Used Bat – Gehrig, like many other stars made the switch for s short time from Hillerich & Bradsby to the Hanna Manufacturing Company of Athens, Ga. for their “Steel Tempered” finish. Since Hanna’s ordering records no longer exist, in authenticating this bat, PSA/DNA referred to an existing side-written model 11 Hanna bat that Gehrig sent to the Louisville Slugger factory to copy. The bat shows outstanding use with a repaired handle crack and many ball marks on the right, left and back barrel and cleat marks on the right left and back barrel. This is a superb gamer attributed to one of the game’s most beloved stars used during the prime of his career. The bat comes with a full LOA from PSA/DNA for the game use and has been graded a “GU 6”. 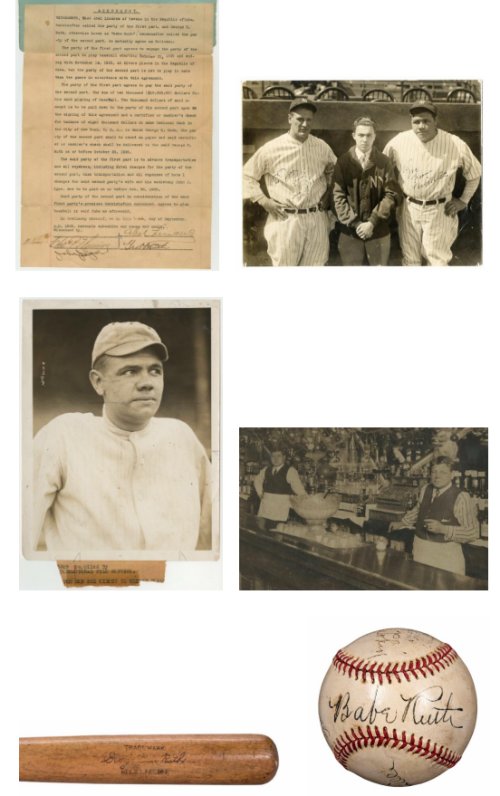 About Goldin Auctions
Sports memorabilia impresario Ken Goldin has sold more than $600 million in memorabilia from many of the biggest names in sports, history and pop culture and was the pioneer of using the medium of television to sell sports memorabilia. Over the past few years, Goldin Auctions sold Babe Ruth’s 1918 contract for a record $1.02 million, the Honus Wagner T206 card for a public sale record $3.12 million, the Mike Piazza Post-9/11 home run jersey for $365,000, and the 1980 Wayne Gretzky PSA 10 rookie card for a record $465,000. Goldin Auctions strives to break new ground and offer collectors the best in collectible treasures up for auction in the marketplace. All game worn or autographed items come with team, player, league or additional LOA from industry leading authenticators; and collectors can bid with confidence that their proxy/ceiling bids remain confidential. For more information, visit www.goldinauctions.com.
Tagsauction babe ruth Babe Ruth Birthplace Museum Babe Ruth sports cards game used bat goldin auctions ken goldin memorabilia Rookie ruth gehrig