Mantle, Robinson, Koufax, Cobb, Brady, Ruth, DiMaggio – immortals each, and all champions once again perched atop the charts in Heritage Auctions’ Nov. 18-20 Fall Sports Collectibles Catalog Auction. They were joined, too, by Mr. Tiger himself, Al Kaline, whose Hall of Fame-worthy collection proved a home run, doubling its pre-auction estimate to sell for more than $1.64 million alone.

The event closed early Sunday morning just past the $26-million mark, far exceeding pre-auction estimates – yet again. Only a year ago it was unheard-of for a sports auction to surpass $20 million; now it’s as commonplace as a Tom Brady touchdown. A record was also set during the weekend, as more than 4,300 bidders worldwide vied for coveted cards and cherished memorabilia, the most ever to participate in a single sports sale.

“This has been an extraordinary year for our consignors and our clients, and we’re thrilled to have ended 2021 the way it began and kept on going, with yet another shot heard ’round the sports-collecting world,” says Chris Ivy, president and founder of Heritage Sports. “Collectors have long known Heritage as the premier house for these museum-worthy items, and we’re proud to have yet again exceeded their expectations, as well as our own.”

The slightly soiled, sweat-stained gray jersey with “NEW YORK” on the front and “7” on the back sold early Sunday morning for $615,000. He wore it on the road during the 1954 season, his first in which he drove in more than 100 runs. The Mick also batted .300 that year, his fourth as a New York Yankee and his first full season back from injury. The jersey had been validated by myriad authentication and grading services. But its magic transcended its game use: Mantle had also signed the jersey — inside, near the collar — just below the embroidered “M. Mantle.” 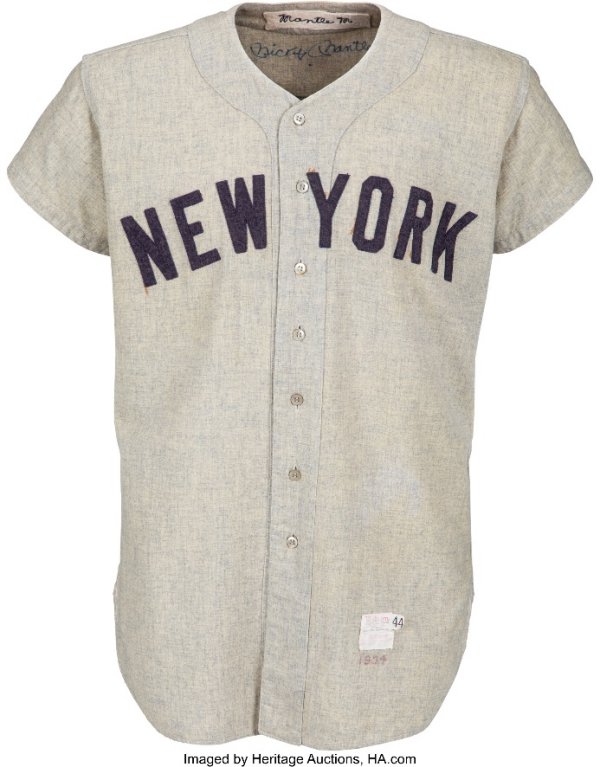 And it’s now clear that the 1948-49 Leaf Jackie Robinson rookie is becoming one of the hobby’s most desirable offerings. Robinson’s first Leaf, in a PSA NM-MT 8, sold for $444,000, and it’s easy to see why. Not only are there only eight known graded better, but it’s just a stunning work, with Robinson and his deep-blue Dodgers cap set against the blindingly bright yellow background.

Another equally stunning Robinson card, his 1949 Bowman graded PSA Mint 9, from his National League MVP-winning season, sold for $360,000. And his 1953 Topps in a PSA Mint 9 shattered its pre-sale estimates to sell for $252,000. It’s easy to see why: It offers a stunning portrait of Jack Roosevelt Robinson, and there’s but one card known that grades higher than the one sold by Heritage this weekend.

Another card to fly past its pre-auction estimate was a 1909-11 T206 Old Mill Ty Cobb graded PSA NM-MT 8. This was the very best of an exceedingly rare breed: the so-called red portrait, which, in that grade, sits alone atop the PSA registry. No wonder it slid into home, spikes up, for an extraordinary final price of $312,000.

A football player managed to sneak his way onto that big-money bench stuffed with legendary baseballers – who else but Tom Brady? Not surprisingly, he threw one of the biggest winners of the weekend, when Brady’s 2000 Bowman (Gold) Rookie in a BGS Mint 9, numbered 12 out of 99 to share its number with Brady, shattered expectations to collect $288,000.

Brady was also responsible for one of the biggest scores of the weekend, when a complete signed ticket from the New England Patriots’ Oct. 14, 2001, showdown with the San Diego Chargers sold for $144,000. That was the game during which Brady threw his first pro touchdown. And this ticket, one of two known, is the best one out there. The GOAT, if you will.

But fabled paper wasn’t the only hit of the weekend: a 1946 Joe DiMaggio game-worn and signed Yankees jersey sold for $266,000 to exceed its estimate. It was photo-matched to that season’s home-opener, which was no “regular” regular season for the Yankee Clipper, who had spent the previous three seasons in the U.S. Army Air Forces, having enlisted on Feb. 17, 1943, and eventually rising to the rank of sergeant. By the time he returned to New York, he was something of a question mark — which was answered during the very game in which he wore this uniform, as he bashed three hits during five at-bats, among them a double to left in the bottom of the ninth that tied the game against the Washington Senators.

And speaking of the Senators …

From 1924 came a World Series ball signed by Walter Johnson, who, three years later, would retire after 21 seasons spent hurling for the team from D.C. According to Johnson’s family he kept few mementos from his playing days, and this ball, says his grandson in a letter accompanying it, was one of only three in his collection: “I believe this to be the ball Earl McNeely hit in the bottom of the 12th inning of the seventh game to win the game for Walter Johnson and the World Series for Washington, the greatest event of his spectacular career.”

According to experts who have examined and authenticated the ball, it was signed by Johnson, who added “World Series 1924.” Once the ball hit the auction block, The Washington Post dug in even further, with Johnson’s grandson noting that the ball should sell for twice its original $90,000 sale price in 2007. Which is exactly what happened: Johnson’s ball sold for $180,000.

And not far behind that ball was a bat swung by one of the game’s greatest hitters: a 1949 Ted Williams game-used slab of Hillerich & Bradsby, which clubbed expectations to sell for $168,000. This is lumber swollen with the bruises of an MVP season. That season Williams dominated the American League, leading the league with 43 homers and tied for tops in RBIs with 159, which was but the tip of the tip of the iceberg during that breathtaking season.

It does not surprise that one of the auction’s biggest hits came from one of basketball’s brightest stars dimmed far too soon: Kobe Bryant. A pair of Adidas EQT Top 10 worn during Bryant’s 1996-97 rookie season as a Los Angeles Laker were estimated to sell for upwards of $15,000. But by the time the auction closed, these game-used and signed sneakers ran out of the gym for $192,000.

That’s not too far off from the price paid for the Wilson model 1265 outfielder’s glove used by Al Kaline during the 1973 season he spent robbing hitters out in right field. The glove was expected to sell somewhere in the low five figures, but by the time the sun rose on Sunday it had been caught by a collector who paid $126,000 for the glove.

Then, almost everything in The Al Kaline Collection –  from the 1984 Detroit Tigers World Championship Ring that sold for $87,000 to the 1968 Detroit Tigers World Series Championship Trophy that realized $56,400 – surpassed pre-auction estimates. It was the centerpiece of a historic auction, and Heritage Auctions was honored to present The Kaline Collection, alongside those of St. Louis Cardinals great Lou Brock, Chicago Bulls three-peat champion Scott Williams and Los Angeles Rams hard-hitting hero Jack Youngblood.

“We do not take this responsibility lightly, and it’s as much an honor as it is a pleasure working with these sports greats and their families to find new homes for their treasures and trophies,” Ivy says. “This is one of the great joys of this job: uniting players and fans through these tangible collections of moments and memories. And we can’t wait to do it all over again.”