Aaron Judge’s 62nd home run ball sold for $1.5 million at auction through Goldin. The sale marks the second-highest price ever paid for a baseball at public auction and puts a bookend on one of the most historic seasons in Major League Baseball history. A prominent Midwestern businessman and collector is now the proud owner of one of the most significant pieces of baseball memorabilia in the world.

The home run ball was consigned to leading collectible marketplace Goldin in November by Cory Youmans, a vice president at a branch of Fisher Investments in Texas. Youmans caught the record-setting ball at Globe Life Field in Arlington, Texas on October 4 and elected to list the item for sale with Goldin instead of selling it privately to add more transparency to the sale process and to enable all interested collectors a chance to bid on history.

“Multiple players have hit more home runs in a season but in many peoples’ eyes, Aaron Judge is the true record-holder,” said Goldin Executive Chairman and Founder Ken Goldin. “The fact that this is the second highest total ever paid for a baseball speaks to the respect that fans and collectors have for Aaron. That’s the magic of sports – this ball didn’t only change Aaron’s life, it changed the life of the fan who was in the stadium that night too. We’re so proud to have been trusted by Cory to present this piece of history for public auction.” 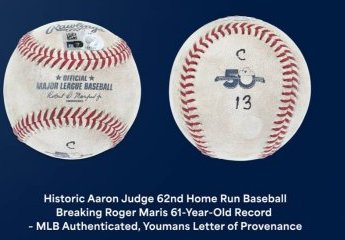 “Congratulations to Joe! Given the historical significance of #62, it was important to me that the selling process was fair, accessible and transparent,” said Youmans. “Joe seems like a great man and the perfect steward for this special piece of MLB history. The ball is in great hands and we thank Ken and the dedicated team. As this chapter comes to an end and I reflect on catching home run ball #62, I’ll always remember the kindness of the fans around me on that exciting night in Arlington. It was the epitome of how sports brings humans together and I’ll cherish that memory forever.”

“I am very lucky with the help of Goldin to become the owner of the world’s most valuable baseball which comes from the most historic franchise in America’s game – the New York Yankees,” said the buyer, who will remain unnamed. “Ruth, Gehrig, Joe DiMaggio, Mantle, Maris, and now Aaron Judge. Aaron had arguably the greatest home run season in baseball history and now he will continue his career with the iconic organization. I am lucky, blessed and grateful to own a piece of baseball and American history and hopefully find a path for others to enjoy this history also. Thanks again to Goldin and the Youman’s family for allowing me this opportunity.”

Judge’s quest to hit 62 home runs and break Roger Maris’ 62-year-old American League record made headlines around the world. After completing one of the greatest seasons ever, Judge signed a nine-year, $360 million contract with the New York Yankees that will likely keep him with the storied franchise for the rest of his career.

Goldin has built a sterling reputation as the leading marketplace for trading cards, collectibles and memorabilia. Over the years, the company and Ken Goldin have sold more than $1.5 billion in memorabilia from many of the biggest names in sports, history, and pop culture, setting countless records in the process. The company has handled the $7.25 million private sale of a Honus Wagner T-206 trading card –  as well as record-breaking sales for items featuring all-world athletes including Michael Jordan, LeBron James, Mike Trout, Serena Williams, Mia Hamm, Kobe Bryant and others.