MeiGray’s 14th Annual Game-Worn Jersey Expo is Saturday, July 15 at the Raritan Valley Community College Conference Center in North Branch. NJ.  And we’re proud to announce that our Featured Guest is Hockey Hall of Famer Adam Oates, one of the 100 Greatest Players in History, as selected by the National Hockey League for the NHL Centennial.

Also attending will be representatives from the National Women’s Hockey League, and the Isobel Cup. 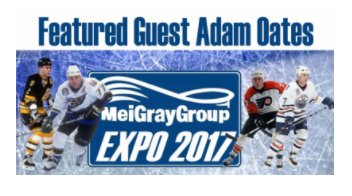 Featured Guest: Hockey Hall of Famer Adam Oates, “One of the 100 Greatest Players in History” selected by the National Hockey League for the NHL Centennial. Oates, the brilliant playmaking center who was inducted into the Hockey Hall of Fame in 2012, played 19 NHL seasons and is 17th All-time with 1,420 points. After rising through the ranks as an assistant coach for Tampa Bay and New Jersey, he spent two seasons as head coach of the Washington Capitals from 2012-14, and was co-head coach of the Devils in 2014-15. Oates, 54, signed out of RPI as a free agent by the Detroit Red Wings in 1985, played for Detroit, St. Louis, Boston, Washington, Philadelphia, Anaheim and Edmonton, retiring in 2004.