Ray Lewis is arguably the best middle linebacker to ever play in the NFL.   With his team’s recent Super Bowl Victory and the explosion in values of verified authentic game used material, Richard Albersheim has decided to sell this jersey that has been sitting in his personal collection since 2005.  Tons of paperwork and COA’s galore accompany this piece.  Tremendous investment potential.  The Auction ends at 7:46 PM Pacific Tonight February 12, 2013. 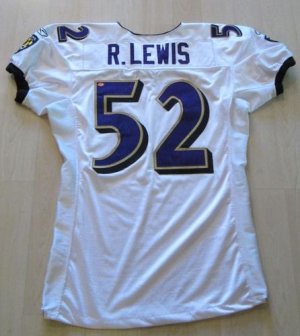 You can find this auction at: http://cgi.ebay.com/ws/eBayISAPI.dll?ViewItem&item=190794904443&ssPageName=STRK:MESE:IT

Drafted by the Ravens in 1996, he has played his entire career for the team, and is the last player remaining from the Ravens’ inaugural season. He has been selected to thirteen Pro Bowls and been named an Associated Press All-Pro ten times. He was the second linebacker to win the Super Bowl MVP Award and the first linebacker to win the award on the winning Super Bowl team. He is arguably the best middle linebacker to ever play in the NFL (this includes: Butkus, Nitschke, Singletary, Lambert, Huff, Bill George, Bednarik).

Since Ray’s career is over and his next stop is Canton, Rich Albersheim decided to offer this jersey out of my personal collection. I purchased this back in 2005 and never really planned on selling it (if it hits the minimum bid or the buy it now, then it’s gone. If it doesn’t sell, it will continue to hang on my wall).

Apart from the team repairs, there appears to be no alterations of any kind. One other note; inside the jersey is the 100% polyester flag tag made in Berlin, WI (washing instructions). This artifact is heavy and from his AP 2003 NFL Defensive Player of the Year. This jersey is accompanied by COA’s from Richard Albersheim, MEARS which did the paperwork in 2005 and called it a 2004 (graded it an A-8), and Lou Lampson. This jersey is awesome.

To put the price point into perspective, a jersey from this season recently sold for almost $12,000 (and that’s from his last season, this is from the prime of his career) and last year a Tom Brady gamer sold for around $50,0000. A great piece, a great investment, ready to join your man cave!!!!