One savvy collector has decided that the magical 2011 World Championship run of the St. Louis Cardinals and their future Hall of Fame first baseman provides the perfect occasion to release the greatest collection of Albert Pujols rookie cards ever assembled. “Just 1,000 copies of the 2001 Donruss Elite Pujols card were ever printed,” said Chris Ivy, Director of Heritage Sports Auctions. “Our consignor bought every one he could find and has designated Heritage as the auctioneer to present this massive collection for sale.” The assemblage is almost equally divided between professionally graded and “raw” examples and includes 10 exceedingly rare and valuable autographed examples. Condition is consistently spectacular throughout the collection.

“This opportunity to control such a significant percentage of one of the most important trading cards of the 21st century is unprecedented in the collecting hobby,” said Ivy. “We can only imagine what the value of this collection will be once Albert has rewritten the record books at the close of his career.”

The auction is presented in an online only Extended Bidding format, closing Saturday, Dec. 4 at 10 p.m. CT. 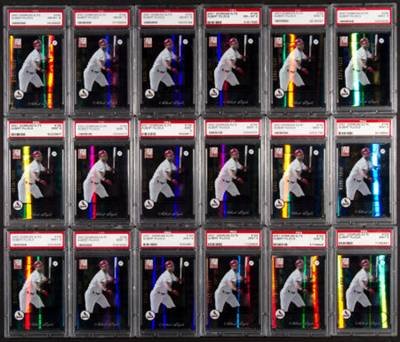 Heritage Auctions, headed by Steve Ivy, Jim Halperin and Greg Rohan, is the world’s third largest auction house, with annual sales more than $700 million, and 650,000+ online bidder members. For more information about Heritage Auctions, and to join and gain access to a complete record of prices realized, along with full-color, enlargeable photos of each lot, please visit HA.com.