Muhammad Ali’s fight-worn trunks from “The Rumble In The Jungle,” offered as Lot No. 574, gets top billing in this sale. After being stripped of his title and suspended from boxing, Ali had to climb back to the top of the sport but was unable to reach its peak after losing the Fight Of The Century against Joe Frazier. But, as champions do, Ali rebounded, earning a title fight against a bruising, athletically superior George Foreman, a fighter with a perfect 40-0 record at the age of 25.

Ali was an 8-to-1 underdog against the champion in the Oct. 29, 1974 match. In what was one of the most highly promoted and widely covered events of the modern era, Ali’s intelligence reigned supreme against the undefeated Foreman, bringing out the “Rope-A-Dope” technique to once again reach the pinnacle of boxing. The trunks have documentation from Ali’s business manager, Gene Kilroy, who could be seen in Ali’s corner on that historic night. There aren’t many pieces of memorabilia that carry more cultural significance in the entire history of sports, and this is without a doubt the crown jewel among any and all boxing memorabilia.

It wouldn’t be a Grey Flannel Premier Auction without Michael Jordan. He arrives in a big way via Lot No. 562, the finest known 1992 United States Men’s Olympic Basketball “Dream Team” jersey, which Jordan game-used and autographed. This one-of-a-kind piece was sourced from NBA personality Craig Sager via the United States Olympic Committee. The “Dream Team” is regarded as the greatest sports team ever assembled for competition, and this historical item of apparel was worn by the greatest basketball player ever. It is in the upper echelon of Jordan items ever to be auctioned publicly. 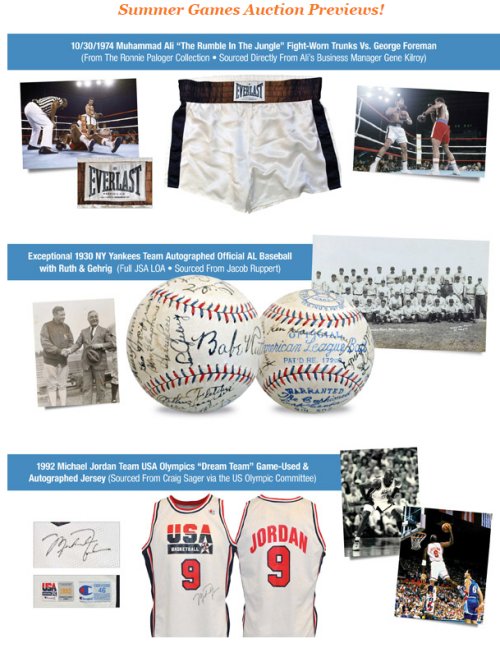 Lot No. 1 is an all-original New York Giants Willie Mays game-used home flannel jersey from the franchise’s final season in New York. The jersey was directly sourced from the team and is brand new to the hobby – one of the finer Mays New York Giants examples ever to surface. Lots No. 4 and No. 5 are two Brooklyn Dodgers flannels that jump off the page. The 1952 Roy Campanella and 1949 Gil Hodges pieces are in all-original condition and were both worn in seasons during which the Brooklyn Dodgers reached the World Series.

Ichiro Suzuki’s Orix BlueWave game-used and autographed road jersey appears in the sale with a starting reserve of $2,500. Suzuki had great success in Japan before moving Stateside to share his talents with America. This 1995 example is when Suzuki earned the Pacific League MVP Award and earned one of his many batting titles. It was gifted directly to Julio Franco, who both shared time together in the Pacific League in Japan.

There’s no shortage of quality apparel worn on the hardwood. Grey Flannel Auctions is proud to offer the ultimate Kobe Bryant collection to coincide with his final season in the NBA. Lots No. 533 through Lot No. 556 are Bryant jerseys, warm-up jackets, shooting shirts and sneakers from different points throughout his storied career, including championship seasons, MVP seasons, scoring champion seasons and the like. Highlights include a 2008 game-used and autographed home jersey, an autographed rookie road jersey, a photo-matched ‘Noche Latina’ jersey worn when Bryant scored 36 points and grabbed 14 rebounds during an MVP season, a 2012 Christmas Day autographed game-used uniform when he scored 34 points, and unique sneakers, such as the ones he wore with a special colorway for Martin Luther King Day, and a pair in which he scored 40 points in a playoff game.

Other May 25 auction highlights include:

The fully illustrated electronic version of the May 25 catalog is available to view online at www.GreyFlannelAuctions.com. For additional information on any item, call 631-288-7800, ext. 223; or email info@greyflannelauctions.com.