Grey Flannel makes it to the big leagues with a new television series on the Velocity Channel. BRAND NEW BACK-TO-BACK EPISODES AIR TONIGHT (10:00 & 10:30 PM EST Check Local Listings) Has Richie Russek got a deal for you! From rare game-worn jerseys to vintage bats that helped shape the game of baseball, the vaunted history of sports holds untold treasures and Richie, with sons Michael and Darren, and their company Grey Flannel Auctions, is on the hunt to find ’em all in the brand new series ALL STAR DEALERS. Airing Tonight:

Dr. J Soars | Rich and his team prepare for their next auction, which includes a Julius Erving ABA all-star jersey and a bat signed by 105 New York Yankees. Rich’s uniform authenticator has disturbing news about a jersey allegedly worn by NFL legend Franco Harris. 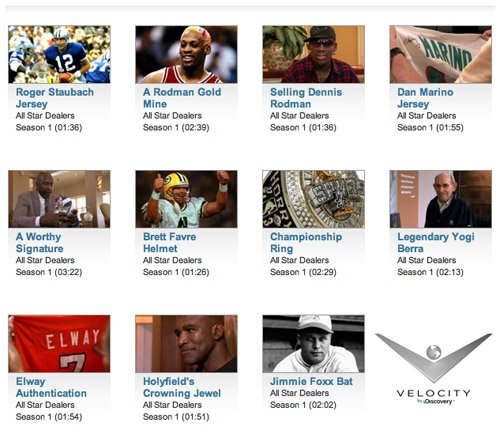 Sayers and Earnhardt | Rich acquires a jersey worn by NBA star Bobby Jones in the 1972 Munich Olympics, and a Gale Sayers jersey arrives in the mail. Then, Rich tries to get a NASCAR collector to consign a pair of Racing Suits worn by Dale Earnhardt and Dale Earnhardt, Jr.