From the early years of the world-famous Ghost Town attraction, the iconic Knott’s Berry Farm Theme Park is opening its archives for a special public auction to be held March 31 by Heritage Auctions. This is the first time since the popular theme park opened in 1940 that it has offered its historic items in a public auction to thank it’s global legion of fans, said Jim Lentz, Heritage Auctions’ Director of Animation.

“This auction showcases the history of Knott’s Berry Farm with rare items from Ghost Town, the famous Chicken Restaurant, Knott’s Scary Farm, and even the fan favorite, Knott’s Bear-y Tales Ride,” Lentz said. “From the park’s humble beginnings as Walter Knott’s berry stand to the theme park that now attracts more than 3 million people per year. This special event celebrates the 75th anniversary of the famous Ghost Town.” 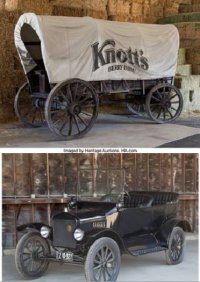 All of the items come directly from the park, which Walter Knott started in the 1940s after he and his family started selling to the public harvested berries from a small roadside stand located 22 miles south of Los Angeles on California State Highway 39.

Nearly 225 lots of rare signs, props and artwork celebrating its Ghost Town attraction are on offer as well as items from the past 75 years of the park. In 1940, Walter Knott began constructing a replica Ghost Town on the property where craftsmen demonstrate the arts of the blacksmith, woodcarver, glass-blower, sign cutter, and spinner. In addition to the rich history of the park’s Ghost Town attraction, the auction will feature items from the famous Chicken Restaurant, Camp Snoopy and the Knott’s Scary Farm.

Highlights include rare Ghost Town memorabilia, including California or Bust Ghost Town panorama painting, circa 1940s-50s (est. $25,000) by artist Paul von Klieben, who worked directly with Walter Knott as his primary art director during the early years of the park; the two collaborated on the 151-inch-by-57-inch mural of a wagon train that became synonymous with the attraction. Additional von Klieben artworks include Under Attack(est. $5,000) a circa 1940s-50s painting for the Ghost Town exhibit; Through the Desert (est. $5,000) and On Schedule, from 1953 (est. $15,000).

Klieben’s famed 1941 Jesus, The Transfiguration, 1941 (est.  $25,000) –  a fluorescent portrait of Jesus Christ on heavy glass that used a black light set-up to make it appear as if Christ’s eyes were opening. 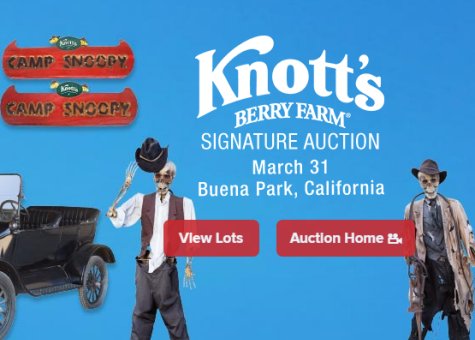 The sale has one of the largest coin-operated antique player pianos and coin-operated games to come to market in recent memory. Props include a rare games, such as a 1910 Washington Scale Caille Bros. coin-op machine (est. $5,000), a selection of antique player pianos, such as a 1910 Creamona coin op Player Piano (est. $5,000) and standing music boxes, on offer are early 20th century carnival games, strength testers and more.

Contemporary props include an Evil Jack in a Box Scary Farm prop (est. $1,000) and Scary Farm canvas paintings as well as animatronic bears and signs from Knott’s Bear-y Tales Ride from 1975 (est. $1,000).

Memorable lots include, but are not limited to:

Heritage Auctions’ special presentation of the Knott’s Berry Farm Archives kicks off with a public viewing March 30 with the auction day set for March 31 at the park, 8039 Beach Boulevard, Buena Park, California, 90620. Learn more at HA.com/7151.