America’s rarest, rabble-rousing poke-in-the-eye to British Parliament – a seldom-seen political cartoon celebrating the 1773 Boston Tea Party – is expected to sell for more than $20,000 after surfacing in Heritage Auctions’ Aug. 25 Americana auction. It was published mere months after the Sons of Liberty, disguised as Mohawk Indians, took to Boston Harbor and destroyed more than 92,000 pounds of tea. Just six copies of the copper engraved cartoon are known in institutional holdings.

Titled: “Liberty Triumphant or the Downfall of Oppression,” the illustration shows the response of New Englanders to the British Tea Tax, enacted in 1773, drawn over a map of the northern and middle colonies. Probably published in Philadelphia or New York, the cartoon is attributed to Henry Dawkins, an engraver who was arrested in 1776 on suspicion of counterfeiting continental and provincial currency, which resulted in a $1,500 fine.

“Revolutionary era cartoons are in exceedingly high demand, and this is an extremely rare print,” Heritage Auctions Americana Director Tom Slater said. “This is a very important cartoon that addresses one of the most successful acts of civil protest in the history of our country. We are aware of just six other copies, all of which are in institutional holdings, making the demand for this one even higher among serious collectors.” 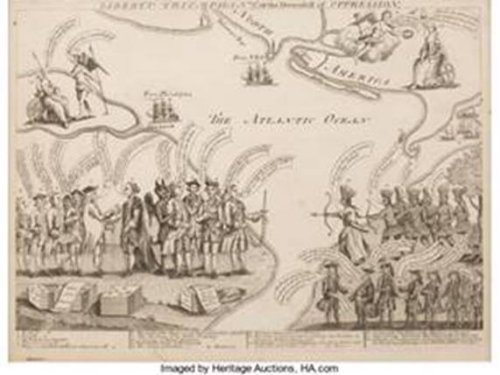 The Boston-based Sons of Liberty, a secret society formed to protect the rights of the colonists and to fight taxation by the British government, targeted the Tea Act of 1773, which allowed the British India Company to sidestep some tax liability while selling tea from China in American colonies, thereby effectively undercutting local tea merchants. Protestors, some of whom were disguised as Native Americans, destroyed an entire shipment of tea on December 16, 1773, forcing the closing of Boston Harbor.

Published after December 23, 1773 and before April 1774, the image is decidedly busy, filled with captions and quote balloons from nearly all of the 30 characters. The left side of the cartoon shows British politicians and merchants with the devil, and American colonists – seven of whom are dressed as Native Americans representing those at the Boston Tea Party – on the right.

Captions at the bottom of the cartoon serve as a key to explain the people and symbolic figures portrayed in it. Most of those on the left are representatives of the East India Company; those in the lower right are colonial merchants who opposed the Tea Party but deemed it better to acquiesce, since the deed was done. On the far right side of the cartoon is a British ship like those the protesters wanted to redirect back to England, prevented from discharging its cargo of tea.

The December 16, 1773 Boston Tea Party was the most dramatic act of civil disobedience to the Tea Act passed the previous spring. Mass protests in Boston, New York, Philadelphia and Charleston effectively prevented the unloading of cargo, leading to the passage of the “Intolerable Acts” and the forced closing of Boston harbor.