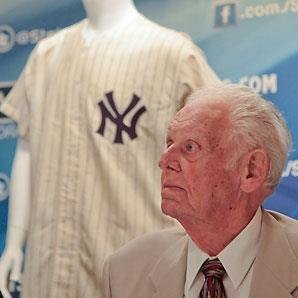 For athletes who retired decades ago like Larsen, significant souvenirs can be worth many times their career earnings.  Larsen’s major league salary may have peaked at $20,000 in 1965. But the value of his uniform has risen sharply. Brandon Steiner, whose sports marketing company will conduct the 56-day auction beginning Oct. 8, the 56th anniversary of Larsen’s perfect game, said it could sell for “close to a million.” Given the potential seven-figure proceeds from the sale, other athletes whose salaries never approached that may wonder whether they have a windfall waiting behind panes of museum glass. The Larsen case could also have broad implications for museums in possession of items of significant value but no conclusive proof of ownership.  Read full story By Tim Sullivan of the New York Times here.